Meanwhile, this was Velocity’s first win from as many matches and currently lead the Women's T20 Challenge 2019 Points Table. Trailblazers have now won one and lost one while Supernovas lost their opening match. 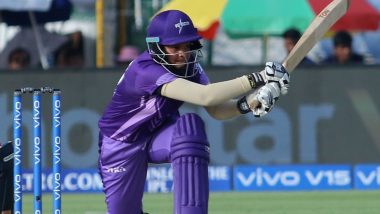 Velocity's Shafali Verma in action during the 2nd match of Women's T20 Challenge 2019 between Trailblazers and Velocity. (Photo Credits: IANS)

15-Year-Old Shafali Verma from Rohtak, Haryana impressed one and all with her stroke-making as she made her debut in the Women’s T20 Challenge. The right-handed batter playing for Velocity scored 34 off just 31 balls against Trailblazers at the Sawai Mansingh Stadium in Jaipur. Shafali’s inning was laced with five fours and a six as she stitched valuable 38-run partnership for the second wicket with international star Danielle Wyatt. Women's T20 Challenge 2019: Velocity Beat Trailblazers by 3 Wickets.

Shafali’s promising knock came to an end after she was caught at point by Rajeshwari Gayakwad off Harleen Deol. The teenager was the second wicket to fell for Velocity who were chasing a target of 113 runs.

After losing Hayley Mathews early with just 25 on board, Shafali joined forces with Wyatt and the duo bailed their side out of the initial slump. Shafali was then dismissed in the tenth overs, but by then Velocity well on course for a win.

Wyatt then added 48 runs for the third wicket with skipper Mithali Raj. However, with just two runs to win, Velocity lost five wickets, including that of well-set Wyatt, without adding a run to the score. Wyatt scored valuable 46 off 35 balls before being dismissed by Rajeshwari Gayakwad.

Wyatt’s dismissal triggered a collapse as Velocity lost four more wickets without adding a run. Mithali too was among the wickets to fell. Eventually, Sushree Pradhan scored the winning runs and helped Velocity win by three wickets,

Meanwhile, this was Velocity’s first win from as many matches and currently lead the Women's T20 Challenge 2019 Points Table. Trailblazers have now won one and lost one while Supernovas lost their opening match.

(The above story first appeared on LatestLY on May 08, 2019 08:44 PM IST. For more news and updates on politics, world, sports, entertainment and lifestyle, log on to our website latestly.com).