Coming into the T20 World Cup, critics were targeting Warner for his below-par performance in the Indian Premier League, but Finch said during the post-match press conference after defeating New Zealand that he never lost faith in the stalwart. 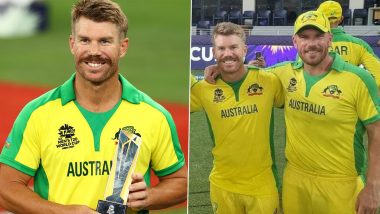 Dubai, Nov 15: Aaron Finch backing opener David Warner through his bad patch was perhaps the Australian limited-overs captain's masterstroke at the ICC T20 World Cup, as the 35-year-old reposed the faith of his skipper to guide the team to its maiden ICC T20 World Cup title.

Coming into the T20 World Cup, critics were targeting Warner for his below-par performance in the Indian Premier League, but Finch said during the post-match press conference after defeating New Zealand that he never lost faith in the stalwart.

Asked, how he backed the out-of-form opener amid calls to replace him, Finch said, "You didn't expect that (good showing from Warner)? I certainly did. Without a word of a lie, I promise you, I called (coach) Justin Langer a few months ago and said, 'Don't worry about Davey, he'll be Man of the Tournament.' Australian Captain Aaron Finch Highlights That Dressing Room Turmoil Is a Thing of Past After T20 World Cup 2021 Win.

"I thought Adam Zampa should have been Man of the Tournament personally, but he's (Warner) a great player. He's one of the all-time great batters. And he's a fighter. He's someone who when his back is against the wall, that's when you get the very, very best of David Warner. It was a special finish to the tournament for him, the last couple of knocks," added Finch.

Finch added that Mitchell Marsh's move to No.3 in the 'Super 12' game against the West Indies was the game-changer for the Kangaroos. Marsh's unbeaten 77 of 50 deliveries was pivotal to Australia clinching a facile win against the Black Caps on Sunday night.

"No. 3 was a really important one in the West Indies. We felt as though he's (Marsh) someone who could play -- he obviously plays fast bowling very well. Growing up in the WACA, he's very, very dominant off the back foot. He's someone who loves the contest, loves the challenge. And we just backed him from the start. We committed to him batting No. 3 for a long time. He knew that, and that was -- that's all you need sometimes. You need a little bit of backing and you need some confidence from everybody else.

"And I think it was the first ball he faced in the practice game, the first practice game against New Zealand where he hit for six, also. That just shows the confidence that he has, the confidence we have in each other. It was brilliant," added Finch. Shoaib Akhtar, Sherfane Rutherford & Others Slam ICC for Not Naming Babar Azam as Player of Tournament Despite Being Leading Run-Scorer of T20 WC 2021 (Check Reactions).

Finch conceded that no matter how much he tried to play down the luck of the toss, it was a big factor in the tournament. On Sunday, going with the trend, Finch won the toss and elected to bowl.

"It (toss) did play a big factor to be honest. I tried to play it down as much as I could because I thought at some point in the tournament I'm going to lose a toss and we'll have to bat first. But it did play a big part. You saw at the end there, the dew factor, the slow balls weren't holding in the wicket as much. I don't know how I did it. Maybe it was just fate."

(The above story first appeared on LatestLY on Nov 15, 2021 02:33 PM IST. For more news and updates on politics, world, sports, entertainment and lifestyle, log on to our website latestly.com).