AB de Villiers Threatened to Walk Out of South African Team During Their Series Against India If Khaya Zondo Was Selected: Reports 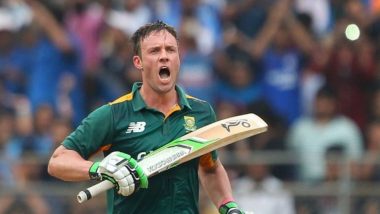 Ab de Villiers had reportedly walked out of their series against India in 2015 if Khaya Zondo was selected in during the final and the fifth ODI against India which was scheduled to happen in Mumbai. Zondo’s name was included in the team sheet but was axed ahead of the game a few hours before the match. Now, this is against the policies of Cricket South Africa. AB de Villiers was the skipper back then. It was News24 who reported this incident. So it was Dean Elgar who had replaced injured JP Duminy and Zondo who was originally a part of the team was sidelined from the squad. Ahead of IPL 2020, Royal Challengers Bangalore Compare AB de Villiers to Doctor Strange (View Post).

After the series, a group of cricketers wrote to the board and wrote to the board pointing out to the incident. They called themselves as 'Black Players in Unity'. They also highlighted that black cricketers were merely water carriers and were treated indifferently. His omission has also brought up the topic of racism and Proteas player Ashwell Prince had also spoken about Zondo’s incident in a Twitter thread. Have  a look at it below:

The system is broken and has been for some time in our beloved SA, both in society and in sport. We return from isolation and we say to the world, “look at us, we’re back, oh by the way, there’s still no black people who can play the game, but we brought a few along”

The visitors had clinched the ODI and T20I series and thus turned out to be quite a memorable outing for the Proteas. AB de Villiers is yet to confirm the incident. Off late many players including Chris Gayle have opened up about racism in the game.

(The above story first appeared on LatestLY on Aug 13, 2020 11:15 PM IST. For more news and updates on politics, world, sports, entertainment and lifestyle, log on to our website latestly.com).