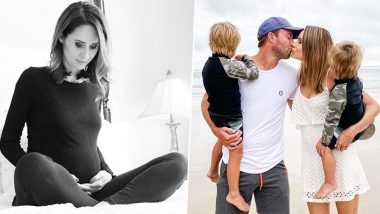 AB de Villiers and his wife Danielle are expecting a third child together. The former South African cricketer’s wife took to her Instagram account to share the piece of news. ‘Hello baby girl’ Danielle captioned her post, in which she showed off her baby bump. The couple are proud parents of two children, Abraham de Villiers Junior and John Richard de Villiers. Kuldeep Yadav Picks AB de Villiers As the Toughest Batsman to Bowl in ODIs, Says ‘It’s a Good Thing That He’s Retired’.

AB de Villiers and Danielle Swart got married in 2013 in Bela-Bela, South Africa after the former South African cricketer proposed to her at the Taj Mahal in 2012. And now Mr and Mrs de Villiers are ready to welcome their third child together. MS Dhoni to Captain AB de Villiers’ Star-Studded IPL XI.

AB De Villiers announced his retirement from cricket in 2016 and since then has been spending a lot of time with his family. The 36-year-old has been contemplating a return to cricket but it has been put on hold for the moment. The South African however, took part in this year’s Big Bash League, where he played for Brisbane Heat, which was also his debut season in the competition.

AB De Villiers was expected to be a part of the Royal Challengers Bangalore team for the 13th edition of the Indian Premier League. But the tournament has been suspended indefinitely amid the coronavirus pandemic. However, in recent months, due to the postponement of Asia Cup 2020 and doubts over the T20 Wolrd Cup, there is a chance of IPL 2020 taking place later in the year.

The cricketer will be in action soon as he is participating in the 3TC Match organised by Cricket South Africa (CSA) on July 18, 2020.  He will be leading AB’s and the other two teams are Quinton de Kock-led Quinny’s Kites and Kagiso Rabada's KG’s Kingfishers

(The above story first appeared on LatestLY on Jul 15, 2020 06:12 PM IST. For more news and updates on politics, world, sports, entertainment and lifestyle, log on to our website latestly.com).