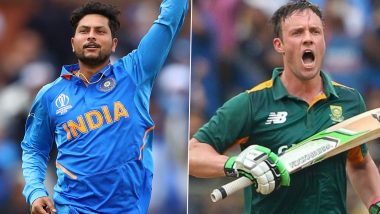 Kuldeep Yadav has been a vital cog of India’s bowling line-up in the last few years and his numbers speak volumes of his prowess. Making his international debut in 2017, the left-arm chinaman spinner has castled many batsmen. However, he recently opened up about that one batsman who haunts him the most. Just like many other bowlers in the modern era, Kuldeep picked former South African captain AB de Villiers as the toughest batsman to bowl in limited-overs cricket. The wrist-spinner praised the Proteas star’s ‘unique style’ and even said that it’s good that he retired from the game. AB De Villiers Picks All-Star IPL XI: MS Dhoni Named Captain; Virat Kohli, Rohit Sharma Included.

“In ODIs, AB de Villiers is a good player. He has a unique style. Now that he’s retired, it’s a good thing! But other than him, I haven’t found any other batsman who I am scared will hit me for a lot of runs,” Kuldeep told Deep Dasgupta in the latest episode of Cricketbaazi on ESPNCricInfo.

De Villiers announced his retirement from the game in 2018 but not before scoring 9577 from 228 ODIs with 25 centuries. However, Kuldeep may have to face De Villiers in international cricket again as he could come out of retirement to play the ICC T20 World Cup.

Further in the discussion, the 25-year-old recalled his dismal performance in the 2019 edition of the Indian Premier League (IPL) and revealed that he worked very hard to redeem himself in 2019 World Cup. “I prepared really well before leaving for the World Cup 2019 because I wanted to overcome my failure in IPL that year. Even though I didn’t pick up many wickets, I think I bowled well at the World Cup,” he opined.

“After that, I have been in and out of the team. If you are playing regularly, your confidence is high. If not, you are always under pressure to perform in the chances you get and your mind stays cluttered. I probably was at fault with my skills as well,” he further added.

(The above story first appeared on LatestLY on Jul 03, 2020 04:44 PM IST. For more news and updates on politics, world, sports, entertainment and lifestyle, log on to our website latestly.com).