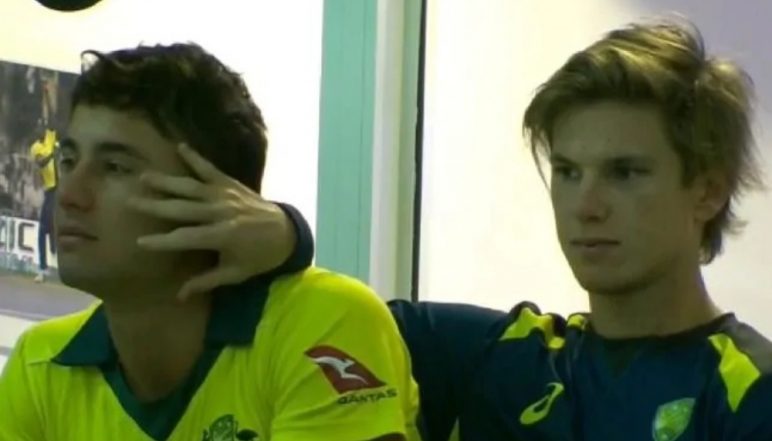 It was during the first ODI between Australia and Pakistan, Marcus Stoinis and Adam Zampa’s moment of PDA caught the attention of the cameramen at the Sharjah Cricket Stadium in UAE. Stoinis and Zampa who were sitting the balcony of the dressing room appeared to share a moment and were very touchy with each other. Zampa was seen running his fingers through Stoinis’ hair and the lensmen in the stadium caught the moment of PDA. Stoinis, on the other hand, responded to the gesture by leaning over Zampa’s shoulders. AUS beat PAK by 8 wickets.

While the two were enjoying a happy and gay moment, Justin Langer was unimpressed with the act. Allan Border and Brendon Julian, who were in the commentary box said, “Looking quite comfortable at the moment the Australian boys,” Border said as Zampa and Stoinis were spotted canoodling together. They might not get down to Stoinis the way things are going at the moment. Julian then cut in to say, “Wouldn’t want to see too much more of that.”  Chennai Super Kings vs Royal Challengers Bangalore Scorecard.

Check out the video if the incident below:

Marcus Stoinis and Adam Zampa are gay for each other.

Talking about the match, Australia won the game by eight wickets. Aaron Finch scored a century. Finch scored 116 runs from 135 balls as the Aussies chased the total of 281 runs. He also scored eight fours and four sixes in his innings. Shaun Marsh made 91 runs from 102 balls with four fours and a couple of sixes.