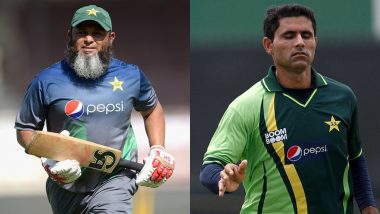 Former Pakistan all-rounder Abdul Razzaq has alleged that India lost to England deliberately during the ICC Cricket World Cup 2019. Razzaq, without naming MS Dhoni, said it was quite visible how Indian batsman despite having the potential to hit sixes and fours was defending. Apart from Razzaq, Mushtaq Ahmed, who was working with West Indies team during the World Cup also had similar thoughts and he he also claimed that some Windies players also felt same. If England had lost to India, it would have helped Pakistan qualify for semi-finals. Ben Stokes Says Never Claimed India Lost to England Deliberately in 2019 Cricket World Cup, 'Words Twisted' Tweets English All-Rounder.

“We were watching the match, we all felt the same. I also think ICC should put a fine on this. If any team loses a match intentionally to make sure a team does not qualify, then the team should be fined for this. If a quality bowler is not trying to bowl according to his standards, not giving a good line and length, and bowling full length, and giving away runs, then it comes to notice,” Razzaq told ARY Sports.

“There is no doubt (India lost the match intentionally). I said it at that time as well. Every cricketer felt the same. A player who can hit a six or a four is defending the ball, you just know,” he further added. MS Dhoni Lacked Intent During India vs England ICC Cricket World Cup 2019 Match, Claims Ben Stokes in his Book.

Mushtaq also claimed: “I was working with the West Indies squad at last year’s World Cup. After India’s loss to England, Jason Holder, Chris Gayle and Andre Russell said to me, Mushy, India didn’t want to see Pakistan qualify for the semi-finals.”

(The above story first appeared on LatestLY on Jun 03, 2020 01:42 PM IST. For more news and updates on politics, world, sports, entertainment and lifestyle, log on to our website latestly.com).