Former Test cricketer Andrew McDonald was on Wednesday appointed the head coach of the Australian men's team on a permanent basis, signing a four-year contract. 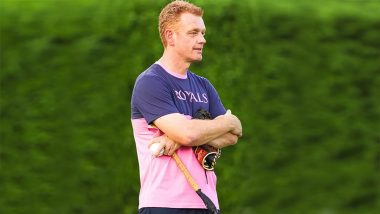 Sydney, April 13 : Former Test cricketer Andrew McDonald was on Wednesday appointed the head coach of the Australian men's team on a permanent basis, signing a four-year contract. McDonald, who was an all-rounder during his playing days representing the Australian side in four Tests, had been made interim coach after Justin Langer stepped down weeks before the gruelling month-long, multi-format away series against Pakistan as the terms of contract renewal were not agreeable to the 51-year-old long-serving coach.

The 40-year-old McDonald oversaw Australia's successful World Test Championship series against Pakistan, winning 1-0. Australia also went on to claim 10 ODI Super League points on the same tour, before ending the sub-continental campaign with a win in the one-off T20I in Lahore. McDonald had joined the Australian coaching setup as an assistant in 2019 after a spell of coaching in domestic cricket, winning both the Sheffield Shield and One-Day competitions with Victoria, as well as the eighth edition of the Big Bash League (BBL) with the Melbourne Renegades. IPL 2022: Ravindra Jadeja Becomes Most Successful Bowler Against RCB.

A part of Australia's successful 2021 T20 World Cup campaign and Ashes series victory over the Australian summer, McDonald faces a challenging 12 months, travelling to Sri Lanka and India before their ICC T20 World Cup title defence in October and November. "The journey so far has been particularly pleasing, and I am honoured to be given this incredible opportunity for what is an exciting period ahead," McDonald was quoted as saying by ICC. "My plan is to build on the growth, depth and experience of the squad while working collectively with the group and across the game. There are many challenges in the short-term which I know excites the leadership group, the players and the staff. I'd also like to thank my family for their support." McDonald beat a number of candidates who were interviewed for the position, considered "one of the most important in Australian sport" by Cricket Australia CEO Nick Hockley. CSK vs RCB, IPL 2022: Royal Challengers Bangalore Missed Harshal Patel's Ability to Stop the Game, Admits Skipper Faf Du Plessis After Defeat.

"Andrew has already shown he is an outstanding Head Coach and the vision he outlined for the role during the appointment process was both impressive and exciting, making him our clear choice. "We are proud of the way the team played and the respect shown throughout the tour of Pakistan under the leadership of Andrew, Pat (Cummins) and Aaron (Finch), and really pleased Andrew is taking on the role permanently." McDonald will operate as head coach across the three formats, though Executive General Manager of High Performance and National Teams Ben Oliver acknowledges that split coaching teams may be necessary in certain situations. "Some white-ball series may be led by an assistant given the significant workload ahead and the opportunity to continue to develop our coaches and players," said Oliver.

(The above story first appeared on LatestLY on Apr 13, 2022 10:16 AM IST. For more news and updates on politics, world, sports, entertainment and lifestyle, log on to our website latestly.com).