Angelo Mathews, Asitha Fernando, Mushfiqur Rahim Nominated for Men’s Player of the Month Award for May 2022 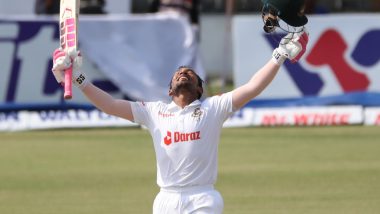 Dubai, June 6: The International Cricket Council (ICC) has shortlisted three Asian cricketers, Sri Lankan all-rounder Angelo Mathews, bowler Asitha Fernando and veteran Bangladesh wicketkeeper-batter Mushfiqur Rahim, for the Mens Player of the Month award for May 2022. The trio has succeeded in finding a place in the elite monthly performance list for their individual performances during a two-match Test series between Bangladesh and Sri Lanka. The Lankans came out on top in the second Test comprehensively by 10 wickets to seal the series 1-0. ICC Women’s Player of the Month: Bismah Maroof and Tuba Hassan, Two Pak Cricketers Nominated.

The veteran Angelo Mathews brought all his experience into play during Sri Lanka's series win over Bangladesh away from home. He finished as the highest run-scorer in the series with 344 runs in two Tests that included two centuries. Pacer Asitha Fernando finished as the highest wicket-taker in the ICC World Test Championship series between Bangladesh and Sri Lanka. He picked up three wickets in the first match in the only innings Sri Lanka bowled. In the second game, though, he returned with 10 wickets in a match that eventually proved to be the difference between the two sides. He completed his maiden five-for with the wicket of Taijul Islam and finished with career-best figures of 6/51 with the final wicket that got Sri Lanka the win. He was duly awarded the Player of the Match for his ten-wicket match haul. Ajinkya Rahane Birthday: Virender Sehwag, Dinesh Karthik and Others Wish Indian Cricketer As He Turns 34.

Fernando finished with 13 wickets to his name, but more importantly, he also emerged as the highest wicket-taker in the ICC World Test Championship series between Bangladesh and Sri Lanka. Bangladesh wicketkeeper-batter Mushfiqur Rahim too was nominated for the award after his remarkable performance against Sri Lanka. It was a memorable series for Rahim despite ending up on the losing side. He finished as the second-highest run-getter with 303 runs and like Mathews, had two centuries to show for his efforts. In the opening Test, he also became the first Bangladesh player to score 5000 Test runs. His 105 in the first Test helped Bangladesh take a 68-run lead. However, his second ton of the series came in more trying circumstances.

(The above story first appeared on LatestLY on Jun 06, 2022 06:30 PM IST. For more news and updates on politics, world, sports, entertainment and lifestyle, log on to our website latestly.com).