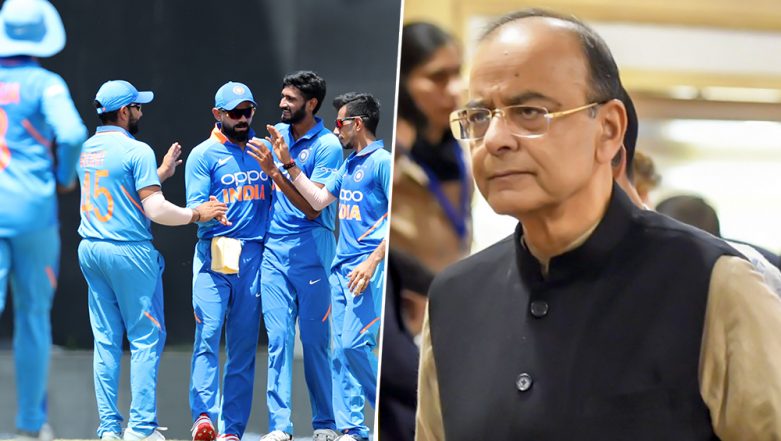 New Delhi, August 24: The Indian players will wear black armbands when they take the field on the third day of the first Test against West Indies at the Sir Vivian Richards Stadium in Antigua as a mark of respect for former BCCI Vice-President Arun Jaitley. The senior BJP leader and former cricket administrator passed away after prolonged illness in the Capital on Saturday morning. Speaking to IANS, a senior BCCI functionary said that while treasurer Anirudh Chaudhry proposed the idea, it was immediately supported by the Committee of Administrators (CoA) and CEO Rahul Johri. Arun Jaitley to be Cremated on Sunday at Nigam Bodh Ghat in Delhi at 2 PM.

"Anirudh felt that the players should wear black armbands as a mark of respect for the man who played a pivotal role in BCCI administration and the board came together to back the idea," the functionary said. The treasurer said that Jaitley's sudden demise was a personal loss for him -- having worked closely with the former BCCI Vice-President over the years.

"Deeply saddened to hear about Jaitley Ji's passing. If there was one thing that was apparent whenever you'd meet him, it was a sense of love with which he mentored those he took under his wing. I have had the opportunity and the good fortune to work with him at various forums at the BCCI and every interaction was a peek into a brilliant mind. He had a phenomenal capacity to read a situation and give invaluable advice and I think that is what made him the go-to person for everybody in the political and cricketing world.

"He had a wonderful sense of humour and the ability to reduce any situation, no matter how complicated, to a single sentence. I learnt from him and grew with every interaction with him and I know he looked out for me. His passing is a personal loss for me and I will always remember him fondly. I offer my condolences to the family," he said. Arun Jaitley's Death is an Irreparable Loss, Says Vice President M Venkaiah Naidu.

The board also sent out a release condoling the sad demise of Jaitley. "The Board of Control for Cricket in India condoles the sad demise of its former Vice-President and a former IPL Governing Council member, Arun Jaitley. A remarkable statesman, Jaitley was a passionate cricket follower and will always be remembered as one of the most able and respected cricket administrators.

"During his long tenure as the President of the Delhi & District Cricket Association, he brought about a tremendous change in the cricketing infrastructure. A close friend of the cricketers, he always stood by them, encouraged them and supported them in their quest for excellence. The BCCI shares the pain and grief of the Jaitley family and prays for the departed soul," the release said.