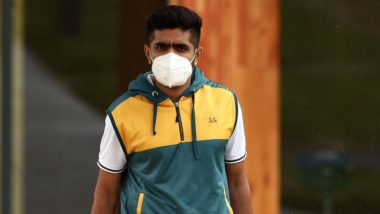 20-member Pakistan squad including Test captain Azhar Ali and T20I captain Babar Azam arrived in Manchester ahead of the bilateral series against hosts England. Pakistan will take on England in three Tests and as many T20Is. The series will be second for England and first for Pakistan following the coronavirus lockdown. Before facing Pakistan, England will take on West Indies in the three-match Test series starting July 08. ECB has not revealed England vs Pakistan schedule as of now. Six Pakistan Players Including Mohammad Hafeez and Wahab Riaz Return Negative for COVID-19 in Second Tests Conducted by PCB.

Before travelling to England, Pakistan Cricket Board (PCB) conducted COVID-19 tests of the players selected for the tour. Ten players were found coronavirus positive in the first round of tests. In the second, six out of ten players returned negative including Mohammed Hafeez, Wahab Riaz, Fakhar Zaman and Shadab Khan. The players, who returned negative after second tests did not travel to England and will undergo further tests.

PCB after some players were found positive then named a reworked 20-member squad for the England Test series, which includes young wicket-keeper batsman Rohail Nazir.

(The above story first appeared on LatestLY on Jun 29, 2020 12:13 AM IST. For more news and updates on politics, world, sports, entertainment and lifestyle, log on to our website latestly.com).