Resistance from Dimuth Karunaratne first, then from Niroshan Dickwella and Dinesh Chandimal, who put on an unbeaten 99-run stand for the seventh wicket, meant both teams had to settle for a draw and share four points each in the ICC World Test Championship. 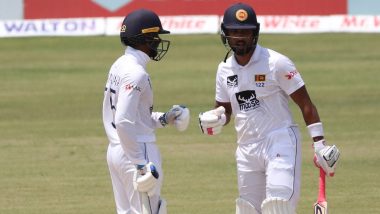 Some brilliant bowling from Bangladesh on the final day made things interesting. Taijul Islam led Bangladesh's attack with guile and spin and at 161/6, the home side would have fancied their chances to bowl the opposition out. Sri Lanka Opener Dimuth Karunaratne To Lead Side in Two-Test Away Series vs Bangladesh.

However, resistance from Chandimal and Dickwella, who put on an unbeaten 99-run stand for the seventh wicket, meant both teams had to settle for a draw and share four points each in the ICC World Test Championship. The result means Sri Lanka and Bangladesh remain rooted to the fifth and eighth spot, respectively on the World Test Championship table.

Resuming Day 5 on 39/2, still 29 runs behind as Bangladesh had raised 465 runs in response to Sri Lanka's first innings score of 397, Kusal Mendis decided attack was the best form of defence and played a counter-attacking innings that quickly wiped out the deficit.

Mendis treated pace and spin with equal disdain -- smashing Taijul for two fours in the very first over of the day before hitting Khaled Ahmed for three consecutive boundaries a few overs later. Nayeem, who picked up six wickets in the first innings, wasn't spared either as Mendis hit a four and a maximum. Taijul finally brought an end to the mayhem with a peach of a delivery that went through the gate, ending Mendis' entertaining knock two runs short of a fifty.

Bangladesh spinners kept the pressure on the new batter, Angelo Mathews. In his attempt to break the shackles, Mathews smashed the ball straight back at the bowler and Taijul completed a great return catch to send the centurion from the first innings back for a 15-ball duck.

Dhananjaya de Silva and Karunaratne ensured there were no more casualties going into lunch. There were jitters in the Sri Lanka camp on resumption when Dimuth Karunratne walked back after his fifty, with Taijul once again providing the breakthrough.

Dhananjaya followed him back to the hut as Sri Lanka were 161/6. At that time, Sri Lanka's lead was only 75 and a couple more wickets would have given Bangladesh a sniff at victory. But, Dinesh Chandimal and Niroshan Dickwella held the fort together, taking Sri Lanka to tea at 205/6.

They continued to make the bowlers toil even in the final session, with Dickwella soon getting to his half-century. The result was soon a foregone conclusion and both teams decided to shake hands with more than an hour of play left.

The second and final Test is set to be played from May 23 in Dhaka.

(The above story first appeared on LatestLY on May 19, 2022 08:15 PM IST. For more news and updates on politics, world, sports, entertainment and lifestyle, log on to our website latestly.com).