Sri Lanka's star opener Dimuth Karunaratne will lead a relatively inexperienced side during their two-match Test series against Bangladesh commencing in Chittagong on May 15. The second Test is scheduled in Dhaka from May 23. 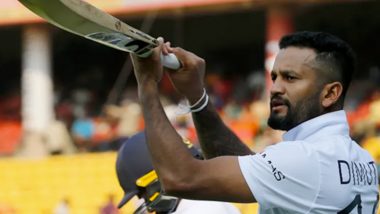 Colombo, May 4 : Sri Lanka's star opener Dimuth Karunaratne will lead a relatively inexperienced side during their two-match Test series against Bangladesh commencing in Chittagong on May 15. The second Test is scheduled in Dhaka from May 23. Sri Lanka Cricket (SLC) selectors named an 18-member squad for the red-ball series on Wednesday, with several key players missing as the island nation chases crucial World Test Championship points. Top-order batter Roshen Silva has opted out of the tour, with former skipper Angelo Mathews and right-hander Dhananjaya De Silva asked to help Karunaratne out at the top of the order. Latest ICC Rankings: India Further Cement Lead at the Top of Men’s T20I Standings.

Karunaratne is currently ranked sixth on the ICC Men's Test Batting Rankings and he will be expected to provide a glut of runs and experience to a Sri Lanka side that is entering a crucial period in the World Test Championship with a home series against Australia to follow after the Bangladesh series. With Suranga Lakmal retired, Lahiru Kumara on the outer and Dushmantha Chameera concentrating on white-ball cricket, Sri Lanka's seam attack is likely to be led by left-armer Vishwa Fernando. The other seamers included in the squad are Kasun Rajitha, Asitha Fernando, Chamika Karunaratne and uncapped Dilshan Madushanka, with Mathews expected to provide plenty of support. Kane Williamson Returns To Lead New Zealand for Test Series in England.

Left-arm spinner Lasith Embuldeniya will lead Sri Lanka's spin attack, with Ramesh Mendis and Praveen Jayawickrama other options that Karunaratne will have at his disposal. Sri Lanka are currently in fifth place on the World Test Championship standings, having won two Tests and drawn another two during the 2021/23 period. Bangladesh have won just one Test in that same period and are in eighth position and currently only sit ahead of England.

(The above story first appeared on LatestLY on May 04, 2022 01:16 PM IST. For more news and updates on politics, world, sports, entertainment and lifestyle, log on to our website latestly.com).