The professional longevity of two of England's legendary bowlers -- James Anderson and Stuart Broad -- has been appreciated the world over, with the two seamers being the all-time highest wicket-takers for their country. 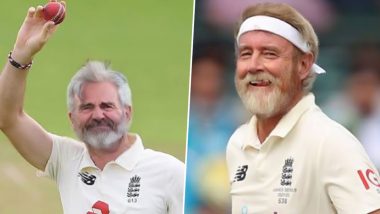 London, June 3 : The professional longevity of two of England's legendary bowlers -- James Anderson and Stuart Broad -- has been appreciated the world over, with the two seamers being the all-time highest wicket-takers for their country. On Friday, Caribbean Premier League (CPL) side Barbados Royals took their 'longevity' to an altogether different level, positing 'images' of the two bowlers -- who share in the vicinity of 1,200 Test wickets among themselves -- in circa 2053 when Anderson would be nearly 70 years old and Broad around 66. England vs New Zealand, 1st Test: Kiwis Strike Back To Maintain Balance Against Hosts on Day 1.

"Year 2053 and these two will still be troubling batters! Absolute legends," tweeted Barbados Royals and posted images of the two having almost completely greyed by then. Anderson, after being dropped from the three-Test away series to the Caribbean has been brought back into the side for the series against New Zealand, and he made an instant impact for the Ben Stokes-led side, returning superb figures of 4/66 in 16 overs, while Broad -- who too was dropped from the Caribbean tour -- also took a wicket in the 13 overs he bowled for 45 runs. Babar Azam, Pakistan Cricket Team Captain, Dreams of Becoming No.1 Batter in All Three Formats.

Anderson is the highest wicket-taker in the world among seam bowlers at 644 scalps, and is third in the all-time list behind Sri Lanka's Muttiah Muralitharan (800 Test wickets), and late Australian legend Shane Warne (708 wickets). Broad is the third highest wicket-taker among seamers with 538 scalps behind Anderson and Australian legend Glenn McGrath, and is sixth in the all-time list. Together the duo dismissed the Kane Williamson-led tourists for 132 runs on the opening day of the first Test at Lord's on Thursday. England closed the day on 116/7 after New Zealand's strike bowlers Tim Southee, Trent Boult and Kyle Jamieson took two wickets apiece. England are 16 runs short of the visitors' first innings total going into Day 2.

(The above story first appeared on LatestLY on Jun 03, 2022 11:16 AM IST. For more news and updates on politics, world, sports, entertainment and lifestyle, log on to our website latestly.com).