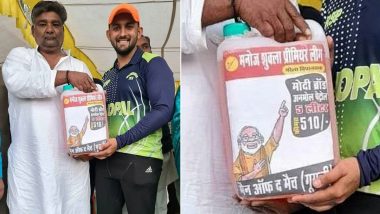 Five litres of Petrol was awarded as Man of the Match in a cricket tournament in Bhopal as petrol price keeps rising across the country. Petrol prices climbed to a record Rs 91.17 per litre in Delhi on February 27 making it the 16th time the fuel prices went up last month. Amidst the continuous rise in petrol prices, a cricket tournament in Bhopal awarded their Player of the Match with 5 litres of petrol.  Bizarre! Umpire Reverses His Own Decision After Making Wrong Call During Marsh One-Day Cup; Leaves Stuart Clark, Brett Lee Amused (Watch Video).

The award was reportedly won by a cricketer names Salauddin Abbasi. The news of a cricket tournament honouring its Man of the Match with 5 litres of petrol set Twitter buzzing and many netizens reacted to the incident. Take a look at some top reactions. Dale Steyn Explains Decision To Skip IPL 2021, Finds PSL, LPL T20 Leagues More Rewarding (Watch Video).

Cricketer Receives 5 Litre Petrol As Man of the Match Award

Man of the match 🏟 award me 5️ Litre #Petrol 😄🏏 pic.twitter.com/GWchd8jsZb

That Smile When You Get 5 Litre Petrol As Reward

That smile when you get 5 liter petrol in Man of the match 💐💐👍👍 pic.twitter.com/qP1vFNypN5

The gradual rise in petrol prices has hit the common man hard with many criticising the government over the increase rate. Some have also called the government to cut down the taxes. Recently, a petrol pump in Karur district of Tamil Nadu came up with a novel idea to give away petrol free-of-cost.

Parents of school-going children can avail the offer if they are able to recite Thirukkural couplets. The petrol pump, which is owned by Valluvar agencies near Nagampalli village in Aravakurichi introduced this offer on January 16 to mark Thiruvalluvar Day.

The offer is available for Class I to IX students, who must accompany their parents to the fuel station. Participants must submit the couplets in writing. They can take part in the contest multiple times but must submit a different couplet each time.

(The above story first appeared on LatestLY on Mar 02, 2021 03:16 PM IST. For more news and updates on politics, world, sports, entertainment and lifestyle, log on to our website latestly.com).