The two football stalwarts have a different fan base and the players are also divided over who between the two is better. Even the cricketing world has picked their favourite between the two. It would be safe to say that Messi and Ronaldo have had a great fanbase across the globe. 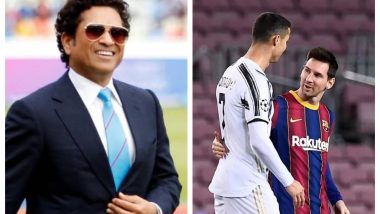 Sachin Tendulkar has picked his favourite between Lionel Messi and Cristiano Ronaldo. Recently during an interview, Master Balster was asked to pick his favourite between Messi and Ronaldo during a rapid-fire round.  In response to this, Master Blaster revealed that he relates more to Lionel Messi than Cristiano Ronaldo. "Messi is more of my type," he answered. Cristiano Ronaldo and Lionel Messi have been compared for donkey's years. Right from their early days to now, the two stalwarts have been compared by the fans and also the football pundits but none of them have come to conclusion about who between the two is better. Cristiano Ronaldo Praised by Ralf Rangnik After his Screamer During Manchester United vs Brighton in EPL 2021-22, Says ‘The Best Performance by Him in the Last Weeks’.

Now check out the video of Sachin Tendulkar making his pick:

Talking about Lionel Messi and Cristiano Ronaldo, the two recently played a game for their respective clubs. Lionel Messi missed the penalty against Real Madrid in the Champions League 2022 match, whereas, Ronaldo scored his first goal of 2022 against Brighton in EPL 2021-22.

(The above story first appeared on LatestLY on Feb 18, 2022 09:16 AM IST. For more news and updates on politics, world, sports, entertainment and lifestyle, log on to our website latestly.com).