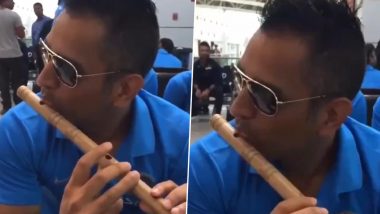 MS Dhoni is a man of many talents and an example of such talent was seen when Chennai Super Kings shared an unseen video of their captain playing the flute to wish fans on the occasion of Janmashtami. This year the festival will be observed on August 11, 2020 (Tuesday). Janmashtami, which is also known as Gokulashtami, is an annual Hindu festival that celebrates the birth of Lord Krishna. Holy Significance, Shubh Muhurat and Celebrations Related to Gokulashtami.

Chennai Super Kings on the official social media account shared a rare clip of captain MS Dhoni on the occasion of Krishna Janmashtami. In the video, the CSK skipper could be seen playing the flute, an instrument which is widely associated with Lord Krishna in Hindu mythology. ‘Minsara Kanna... 😍 #WhistlePodu #HappyJanmashtami’ the IPL franchise captioned their post. Ahead of IPL 2020, CSK Star Suresh Raina Gets His Wife, Children’s Name Tattooed (View Pic).

Speaking of MS Dhoni, the former Indian skipper has not played competitive cricket since India’s exit from the 2019 Cricket World Cup in the semi-finals against New Zealand. But he will be back on the field when he leads CSK in the 13th edition of the Indian Premier League.

IPL 2020 will be played in the United Arab Emirates (UAE) as BCCI received official permission from the Indian government to host the competition in the country. This will be the second time that the tournament will be played in UAE, with 2014 being the last time the cash-rich league was played over there.

The latest edition of IPL was initially planned to start in March 2020 but had to be postponed due to the coronavirus pandemic. However, after the suspension of World T20 2020 and Asia Cup 2020, the competition will go ahead from September 19 onwards. An official schedule is expected to be released in the coming weeks.

(The above story first appeared on LatestLY on Aug 11, 2020 03:48 PM IST. For more news and updates on politics, world, sports, entertainment and lifestyle, log on to our website latestly.com).