CSK now take on Kings XI Punjab on April 15 in Mohali while KKR face Sunrisers Hyderabad at home on April 14. 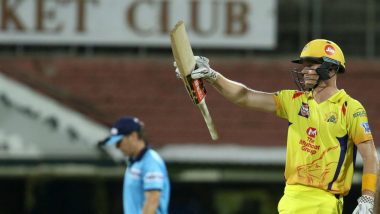 Sam Billings was named Man of the Match for his half-century (Photo: @ChennaiIPL/Twitter)

Chennai Super Kings return to home in a grand style as they register a five-wicket victory over Kolkata Knight Riders in the fifth match of Indian Premier League 2018 (IPL 2018). Chasing mammoth 203 runs, CSK completed the target in the last over with five wickets in the hand. The hero of the match for Super Kings was English batsman Sam Billings who smashed 23-ball 56 to help his side chase down the difficult target. Besides him, there were significant contributions from Shane Watson and Ambati Rayudu as CSK move to the top of IPL 2018 points table. CSK vs KKR- As it Happened

Watson and Rayudu provided CSK the start they need after KKR posted a huge total. Watson started off impressively by smashing Vinay Kumar for 16 runs in the opening over. He was soon joined by Rayudu and the openers brought up the 50-run stand in no time.

However, Tom Curran, who was making his IPL debut, removed Watson in the sixth over to put some brakes on CSK scoring. Knight Riders then found wickets of Rayudu and Suresh Raina in quick time. You can watch video highlights of CSK vs RR here.

Skipper MS Dhoni and Billings then brought some stability in CSK’s innings and added 51 runs for the fourth wicket. It was Piyush Chawla who removed Dhoni in the 17th over to bring KKR back in the contest.

Despite Dhoni’s dismissal, there was no respite for KKR as Billings smashed bowlers all-round the park. Hw completed his half-century and took CSK close to the target. However in the penultimate over, he was caught near long-off on the bowling of Curran.

Needing 17 off last over, Dwayne Bravo smashed Vinay Kumar for six on the first ball which was adjudged no-ball as well. Thus bringing the equation down to 10 off six balls. CSK eventually crossed the line with Ravindra Jadeja hitting a huge six.

CSK now take on Kings XI Punjab on April 15 in Mohali while KKR face Sunrisers Hyderabad at home on April 14.

(The above story first appeared on LatestLY on Apr 11, 2018 12:40 AM IST. For more news and updates on politics, world, sports, entertainment and lifestyle, log on to our website latestly.com).