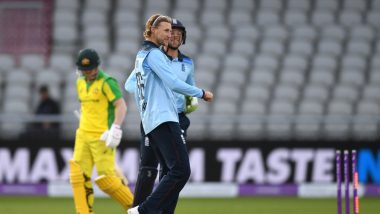 David Warner was trolled on social media after getting out to a turner from Joe Root. Warner had a poor ODI series and an indifferent tour of England with only one half-century to his name after five matches in the tour. Warner hugely disappointed throughout the tour and has been out to Archer in four of the five games that he has played in this tour. In the third ODI though, Warner was dismissed by Root who bowled a terrific delivery to run through the left-handed opening batsman’s defence. Warner was brutally trolled for getting out to a part-timer. England vs Australia 3rd ODI 2020 Live Score.

Warner has been out for single-digit scores in four of the five matches he has played. He managed a half-century in the opening T20I but has since been dismissed for single-digit scores. He managed to score 24 off 32 deliveries in the series decider before Root crashed his stumps with a ripper. Warner was subsequently trolled for his dismissal. Mitchell Starc Teases Adil Rashid With 'Mankading' Attempt During England vs Australia, 3rd ODI 2020 (Watch Video).

The 33-year-old was batting on 24 and had hit three boundaries in his innings. Australia needed a big score from the experienced opening batsman to chase down 303 runs and clinch the series. Warner saw-off the opening spell from Archer but was dismissed by Root in his very first over. The ball bounced and turned away from Warner before crashing his off-stump. Many fans took to social media to troll the Australian.

You cannot do that Joe Root 🤯#ENGvAUSpic.twitter.com/XljWB3lcvp

Warner's Contribution in the ENG vs AUS Series

Dave Warner is gone as @root66 gets him with an absolute ripper! 💥#ENGvAUS pic.twitter.com/e8ew5lUJ7G

Warner After Getting Out to Root

Warner getting out to Root after surviving Archer! pic.twitter.com/iWyXTKCxub

Meanwhile, Australia were off to a poor start with captain Aaron Finch and Marcus Stoinis getting dismissed early to leave the team reeling at 31-2 chasing 232. Earlier, the visitors failed to capitalise on two early wickets and let England escape and post 302 runs on board. Mitchell Starc had sent back Jason Roy and Joe Root in the opening two deliveries of the match but Australia failed to take regular wickets and stop the hosts from reaching 300 runs.

(The above story first appeared on LatestLY on Sep 16, 2020 11:59 PM IST. For more news and updates on politics, world, sports, entertainment and lifestyle, log on to our website latestly.com).