While the hosts are on the verge of completing another series victory in the home summer, Pakistan, who haven't lost a series in the country since the end of 2010, will look to maintain their record. 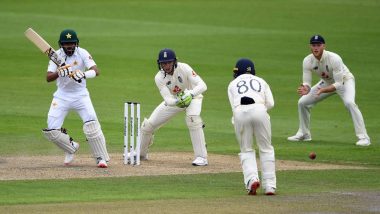 Southampton, August 20:  England batsman Ollie Pope has said the team is gung-ho about ending the ongoing rain-marred Test series against Pakistan with a win in the third Test which begins Friday at the Ageas Bowl.

"The third Test looks likely to be our last Test this year so there's extra motivation to put another win on the board, especially after losing so much time to bad light and rain in the last game," Pope said in his blog for Sky Sports.

England lead the series 1-0 after their dramatic win in the first Test and the rain-hit second Test which ended in a pale draw.

"Our Old Trafford victory feels an age away after the frustrations of the last week.

"Thankfully our hotel here at the Ageas Bowl is just across the ground from the changing rooms so when the weather did interrupt play we were able to go back to our rooms and switch off.

"My darts are definitely better than they were at the start of the series but I'm still not peppering that triple 20 as much as Woakesy (Chris Woakes) or Jimmy (James Anderson)," said Pope.

"The players are 100 per cent keen to support any idea that helps us play as much cricket as possible when conditions are bearable, so there's plenty to discuss.

The light has been an issue and Pope said he does not feel that batting in bad light against the Dukes ball is a biggest challenge.

"I don't regard batting in bad light against the Dukes ball as the biggest challenge in the game because of the white sightscreen, although it does make facing bowling -- that is consistently above 90mph -- more difficult.

"Rather, I find it a little bit harder in the field to pick up the ball - for example if you're standing at backward point and the ball is slashed at you. Every now and again you just lose the ball completely.

"The umpires were following protocols in the last Test and they've got to make decisions that are safe for the players, so I don't envy them.

One school of thought is to introduce a lighter-coloured ball when the light does deteriorate, or to even play the whole game with a pinker ball," he added.

While the hosts are on the verge of completing another series victory in the home summer, Pakistan, who haven't lost a series in the country since the end of 2010, will look to maintain their record.

England are placed third behind India and Australia with 279 points in the ICC World Test Championship points table and a win in the final Test will take them past Australia into second position.

On the other hand, Pakistan are placed at the fifth spot with 153 points. A win will take them above New Zealand to fourth, but they will still be far for third-placed England.

(The above story first appeared on LatestLY on Aug 20, 2020 04:10 PM IST. For more news and updates on politics, world, sports, entertainment and lifestyle, log on to our website latestly.com).