England vs Pakistan Head-to-Head Record: Ahead of the Series Opener, Here Are Results of Last Five ENG vs PAK Test Matches 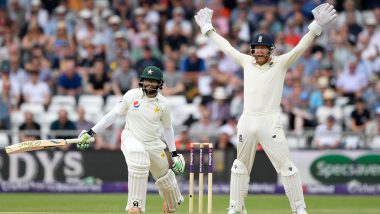 England host Pakistan in the opening game of a three-Test series hoping to continue their good run in the longest format of the game. The England vs Pakistan opening Test match will be played at the Old Trafford Cricket Ground in Manchester. England enter the three-Test series on the back of a 2-1 series win over West Indies at home while Pakistan last played a competitive game in February and have not played since then if the Pakistan Super League is not considered. The visitors also have come with an inexperienced but young squad. Ahead of the ENG vs PAK 1st Test, take a look at their head-to-head records. Pakistan Likely Playing XI for First Test vs England: Check Out PAK's Predicted Team for Series Opener at Manchester.

Pakistan held England to draws in both of their last two visits to the UK and will hope for a similar result when they face Joe Root’s men in the upcoming series. Both sides have faced each other 83 times in Test matches with England winning 25 times and Pakistan emerging victorious times. 37 Test matches between these two teams have resulted in draws. In their last five Test meetings, England have three and lost two all at home. England vs Pakistan 1st Test 2020: Ben Stokes, Naseem Shah, Babar Azam and Other Key Players to Watch Out for in Manchester.

The hosts started the match 0-1 behind in the two-Test series and produced a brilliant performance to tie the series. Three-wicket hauls from James Anderson, Stuart Broad and Chris Woakes first helped England bundle Pakistan for 174 runs after the visitors had opted to bat first. Jos Buttler then scored a quick-fire 80 and helped by some vital 40s from other batsmen Pakistan took a 189-run lead. Broad and Dominic Bess then returned and folded Pakistan for 134 runs to win by an innings and 55 runs.

England had opted to bat first and Alastair Cook responded to that call with a well-made 70 but only one other batsman managed to reach half of that score with Mohammad Abbas and Hasan Ali running through the English order. Azhar Ali, Babar Azam, Asad Shafiq and Shadab Khan then hit half-centuries to give Pakistan a 179-run lead.

England somehow managed to cross that figure, thanks to half0centuries from Buttler and Bess but set Pakistan only 63 runs target and the visitors got there in 12 overs. Abbas finished the match with eight wickets.

Moeen Ali smashed a hundred and Jonny Bairstow a fifty to help England post 328 onboard after choosing to bat first. But Pakistan responded with a double hundred from Younis Khan and a century from Asad Shafiq. Pakistan took a 242 runs lead and England only managed 253 in response with Yasir Shah taking a fifer. The visitors chased down 39 with 10 wickets in hand.

Gary Balance and Moeen Ali scored half-centuries and Alastair Cook 45 runs after England were asked to bat first. They could only post 297 and in return, Pakistan made 400 runs in their first innings. Azhar Ali scored a hundred while Sami Aslam 82. England set Pakistan 339 runs target after declaring at 445/6 with five of their top seven hitting fifties. Like their batsmen, the England bowlers then bowled in partnership and cleaned Pakistan for 201 with five England bowlers sharing the 10 fallen wickets.

The hosts fell behind 0-1 in the four-match Test series and needed to respond well in the second Test and they did just that. Captain Alastair Cook hit a century and future skipper Joe Root a double hundred as England declared their first innings on 589/8. Woakes then swung the tide in their favour with a four-wicket haul. England built on their 391 runs lead and set Pakistan a 564-run target. Pakistan were out for 234.

(The above story first appeared on LatestLY on Aug 04, 2020 10:40 PM IST. For more news and updates on politics, world, sports, entertainment and lifestyle, log on to our website latestly.com).