West Indies captain Jason Holder opted to field again just three days after watching the same decision result in a heavy defeat at the same ground. Like that opening day of the second Test, West Indies started on top again. If Roston Chase had run through England’s top-order last Friday, Kemar Roach did it today. 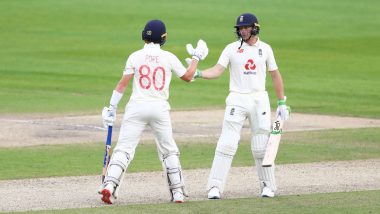 England walked back as the happier side after bad light forced stumps on day 1 of the ENG vs WI 3rd Test match at Old Trafford. Jos Buttler remained unbeaten on 56 while his partner Ollie Pope ended the opening day only nine runs short of what could be his second Test hundred and maiden century at home. West Indies had started brightly and restricted the hosts to 122/4 inside the opening two sessions but as England looked to be slipping away, Pope and Buttler held fort and avoided a collapse. Both registered half-centuries and trudged England to safety. Take a look at some stat highlights and records created on an opening day. England vs West Indies 3rd Test 2020, Day 1 Highlights.

West Indies captain Jason Holder opted to field again just three days after watching the same decision result in a heavy defeat at the same ground. Like that opening day of the second Test, West Indies started on top again. If Roston Chase had run through England’s top-order last Friday, Kemar Roach did it today. He trapped Dominic Sibley in the very first over and gate-crashed Stokes’ stumps to leave the hosts stuttering at 92/3. Rahkeem Cornwall Takes One-Handed Spectacular Catch to Dismiss Rory Burns During ENG vs WI 2020 3rd Test Match (Watch Video).

Chase then preyed on Rory Burns again after sending back captain Joe Root with a direct throw. It the third successive time in this series, Burns was out to spinner Chase leaving England at 122/4. Enters Jos Buttler to partner Ollie Pope. Both were new to the crease and both out if runs in the series. The former was even perhaps fighting for his place after going 14 innings without any respectable score. But they steadied, waited patiently and then scored freely towards the day end reaching some personal milestones.

#Dominic Sibley registered a second duck in his nine Test-career. It was also his second in three Tests and both have come in the first innings and against West Indies

#England captain Joe Root was run-out for the second successive innings in this series. This was the fourth time he was run-out as a captain, which the most by an England skipper

#Shanon Gabriel has now gone 50 overs without a wicket. He took nine wickets in the first Test and remained wicketless in the second Test as well as in this innings

#Jos Buttler recorded his 16th half-century in Test cricket. It was also his first in 15 innings equalling his previous record of the longest gap between two Test half-centuries. He had gone without a Test fifty for 15 innings between July 2015 and November 2016

#Ollie Pope registered his fourth Test half-century and maiden in England. Each of his previous three fifties, as well as the hundred, had come in overseas conditions

West Indies, who took four wickets in the opening two sessions ended wicketless in the final session of the day despite bowling 5.4 overs with the second new ball. They were guilty of sluggish fielding and wayward bowling at times in the final session with exhaustion and tiredness perhaps a key factor for their going off track so sudden.

But even as the visitors faltered, Buttler and Pope remained vigilant defending the good ones and sending the bad ones into the fence – towards the end, bad deliveries came in plenty and they played all to remain unbeaten on a 136-run partnership.

(The above story first appeared on LatestLY on Jul 25, 2020 12:17 AM IST. For more news and updates on politics, world, sports, entertainment and lifestyle, log on to our website latestly.com).