Broad came and started hitting. The left-hander hadn’t scored a half-century since 2017 but made merry of few looseners from Windies bowlers for his first Test fifty in three years. His innings of 62 from 45 deliveries with the help of nine boundaries and a maximum was also England’s third-fastest half-century in Test matches. 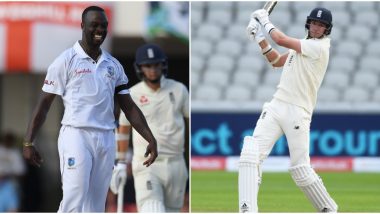 Stuart Broad and James Anderson put England on top at the end of day 2 of the 3rd Test between England and West Indies in Manchester. Anderson and Broad, bowling in tandem, got two wickets each while Jorfa Archer and Chris Woakes shared the other two as West Indies faltered once again with the bat in this three-Test series. Like they have throughout this series, West Indies once again started as the brighter side and took four quick wickets in the opening half-hour on Day 2 but Broad smacked them with the bat and then did his thing with the ball. Broad-Anderson created new records on day 2. England vs West Indies, 3rd Test 2020, Day 2, Highlights.

England were bowled out for 369 with Kemar Roach taking four wickets while Shannon Gabriel and Roston Chase shared two each. But in the manner Roach and Gabriel started, England looked like they will fall short of 300. Gabriel had Ollie Pope dropped in his very first over at second slip but returned to clean bowl the young batsman, who fell for his overnight score of 91 and nine short of a maiden Test hundred in England. England vs Ireland 2020 ODI Series Schedule in IST: Get Fixtures, Full Time-Table With Match Timings.

Chase then joined the fun and removed Woakes for his 200th Test wicket before Gabriel accounted for Jos Buttler. When Buttler departed, after nicking to Holder at first slip, England were still 28 runs far from the 300-mark with only Broad and Anderson to come out.

Broad came and started hitting. The left-hander hadn’t scored a half-century since 2017 but made merry of few looseners from Windies bowlers for his first Test fifty in three years. His innings of 62 from 45 deliveries with the help of nine boundaries and a maximum was also England’s third-fastest half-century in Test matches. Then with the ball, Broad struck first but it was Anderson, who took the milestone wicket that made him the highest wicket-taker in Test matches involving both these nations. Take a look at some stat highlights from Day 2.

#Kemar Roach became ninth West Indies bowler to take 200 or more Test wickets. He is the first West Indies player to reach the milestone in 26 years. Curtly Ambrose in 1994 was the last Windies bowler to complete 200 wickets in Test matches

#Roach is also the eighth fastest West Indies bowler to achieve the feat having reached there in 59 Test matches. He beat Andy Roberts who took 80 Test matches to get there

#Ollie Pope and Jos Buttler recorded England’s second-highest partnership for the fifth wicket in Test matches at home. Their stand of 140 was only behind is only behind Ian Bell and Paul Collingwood’s partnership of 144 at Lord’s in 2007

#Ollie Pope failed nine runs short of a maiden Test hundred in England. It could have also been his second Test century

#Stuart Broad smashed the joint third-fastest Test fifty for England. His fifty of 33 deliveries is equal with Allan Lamb and Andrew Flintoff, who scored half-centuries off 33 balls against New Zealand in 1992 and 2002. Ian Botham holds the record for fastest Test half-century for England

#James Anderson overtook Fred Trueman to become the highest wicket-taker in Test matches between England and West Indies. Anderson now has 87 Test wickets against West Indies while Trueman is second with 86 scalps

West Indies lost Kriagg Brathwaite for one run, their second wicket fell on 44 and half of their side was already out and back into the pavilion even before they crossed the three-figure. Brathwaite was caught at slip, Campbell out to a short delivery from Archer. Hope continued his struggle and Brooks failed to read Anderson while Chase went in the same fashion as he has been throughout this series.

Jermaine Blackwood and Holder shared a short stand but Blackwood, who has been West Indies’ best batsman in this series, was undone with a full-length delivery from Woakes. Shane Dowrich somehow survived a barrage of short deliveries to remain not out with his captain as West Indies, helped by bad light,  ended day 2 on 137/6. They still trail England by 232 runs.

(The above story first appeared on LatestLY on Jul 25, 2020 11:51 PM IST. For more news and updates on politics, world, sports, entertainment and lifestyle, log on to our website latestly.com).