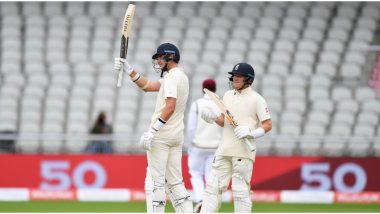 Stuart Broad swung his bat and swung the tides once again in England’s favour on day 2 of the ENG vs WI 3rd Test match in Manchester. Broad scored 62 before sweeping straight to Jermaine Blackwood off the bowling of Roston Chase. But by then, he had already smashed England’s third-fastest fifty in Test matches. Broad’s 62 runs comprised of nine boundaries and a maximum in just 45 deliveries and he helped England cross the 350-run mark after losing four quick wickets in the opening session of day 2 in the third Test. England vs West Indies Live Score Updates of 3rd Test 2020.

Broady having some fun this morning! 💥

Former Pakistan captain Misbah-ul-Haq leads the chart of fastest fifty in Test cricket having scored one in just 21 deliveries against Australia in 2014. David Warner is second in the overall charts with a 23-ball half-century against Pakistan while Jacques Kallis (24), Shane Shillingford (25) and Shahid Afridi (26) complete the top-five among batsmen with fastest half-centuries in Test cricket.

Broad, who hadn’t scored a half-century since 2017 when he scored 56 against Australia at Melbourne, came in with England at 280/8 having just lost their last four wickets for 20-odd runs. The left-hander played shots all-round right from the go and smashed nine fours through the course of his innings and a huge six off Roach over mid-wicket. His power knock helped England cross the 350-run mark. Broad was eventually dismissed by Chase for 62 and England folded for 369 runs.

(The above story first appeared on LatestLY on Jul 25, 2020 06:01 PM IST. For more news and updates on politics, world, sports, entertainment and lifestyle, log on to our website latestly.com).