England vs Ireland 2020 ODI Series Schedule in IST: Get Fixtures, Full Time-Table With Match Timings and Venue Details of IRE Tour of ENG 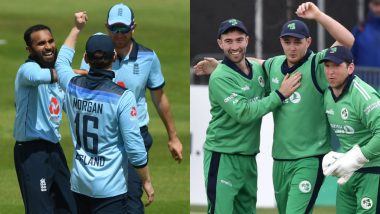 England hosted West Indies for first bilateral cricket series after the coronavirus lockdown. The two teams faced-off in the three-match Test series. Now, England will host Ireland for a three-match One-Day Internationals (ODIs). This will be the first ODI series after the COVID-19 lockdown. The three ODIs will be played behind the closed doors in a bio-secure bubble just like the England-West Indies Test series. Following the ODI series, England will then host Pakistan fro three Tests and as many T20Is. Fake VIVO IPL 2020 Schedule in PDF For Download Goes Viral on WhatsApp: BCCI Yet to Announce Time Table for Upcoming Indian Premier League Season 13.

World Cup-winning captain Eoin Morgan will continue to lead the England ODI side while all-rounder Moeen Ali will be his deputy. Members of England Test squad against West Indies will not take part in the ODIs against Ireland. The visitors have named 21 players for the series, out of which 14 will be part of the main squad while seven will be reserves. Andrew Balbirnie will captain the Ireland ODI team. England vs Pakistan 2020: No Added Pressure Due to Sarfaraz Ahmed’s Presence, Says Mohammad Rizwan.

All the matches will be played at a single venue- The Rose Bowl, Southampton. Interestingly, England will play back to back when they face Ireland in the last ODI (August 04) and Pakistan in the first Test (August 05). However, two separate set of players will be in action.

(The above story first appeared on LatestLY on Jul 25, 2020 05:34 PM IST. For more news and updates on politics, world, sports, entertainment and lifestyle, log on to our website latestly.com).