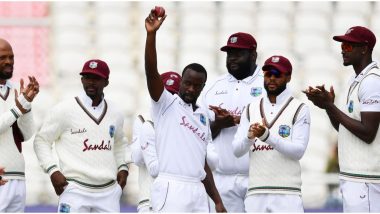 Courtney Walsh, Ambrose, Marshall, Lance Gibbs, Joel Garner, Holding, Garry Sobers and Andy Roberts are the other West Indies bowlers to take 200 Test wickets for West Indies. Among them, Roach is the eighth fastest to reach the landmark having got there in 59 Test matches. He overtook Gray Sobers, who had taken 80 Test matches to complete 200 Test wickets. Ollie Pope Misses Maiden Test Hundred in England, Out for 91 During ENG vs WI 3rd Test 2020 in Manchester.

Woakes was out after edging a half-length delivery into the stumps giving Roach his 200th Test wicket. The pacer went to dismiss Jofra Archer in his next over and needs one more wicket in this innings to take his 10th five-wicket haul in Test matches. Archer nicked one to Jason Holder at second slip to leave England on 281/8 on the second day of the series decider.

(The above story first appeared on LatestLY on Jul 25, 2020 04:29 PM IST. For more news and updates on politics, world, sports, entertainment and lifestyle, log on to our website latestly.com).