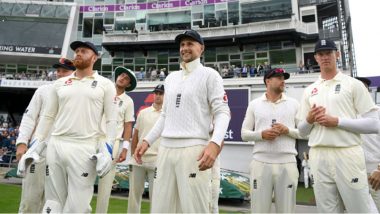 London, June 23: England's 30-member squad on Tuesday will undergo second round of COVID-19 testing following their arrival at the Ageas Bowl for the training camp starting Thursday. The preparatory camp is being held ahead of England's three-match Test series against West Indies, starting July 8, which will also mark the resumption of cricket after the sport was suspended in March due to coronavirus pandemic. England vs West Indies 2020: Three Windies Players Refuse to Travel for England Test Series.

According to a report in Daily Mail, all 30 players had tested negative in the first round of tests but will have to isolate themselves till the results of second round of tests are out. Following the training camp, the players will also take part in a thee-day practice match starting July 1. After this, the squad will be shortened to a team of 20 for the much-anticipated Test series.

West Indies had famously beaten England during the previous series between the two sides that was played in the Carribbean islands. A draw in the series would be enough for them to retain the Wisden trophy.

(The above story first appeared on LatestLY on Jun 23, 2020 04:03 PM IST. For more news and updates on politics, world, sports, entertainment and lifestyle, log on to our website latestly.com).