Former South African captain Faf du Plessis has announced retirement from Test cricket after Australia’s tour was postponed due to COVID-19 pandemic. Du Plessis will undoubtedly go down as one of the greatest Proteas Test batsmen ever. 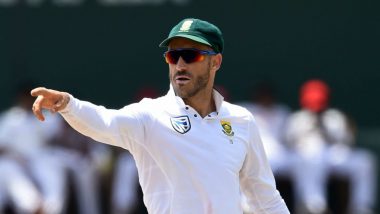 Former South African captain Faf du Plessis has announced retirement from Test cricket after Australia’s tour was postponed due to COVID-19 pandemic. Du Plessis will undoubtedly go down as one of the greatest Proteas Test batsmen ever, and his record in the format speaks volumes of his prowess. He scored 4163 runs in his 69 Test matches at an average of over 40, comprising ten centuries. However, he failed terribly in South Africa’s recent tour of Pakistan, scoring mere 55 runs in two Tests. The 36-year-old said that he wanted to hang up his boots from the format after the series against Australia, but with the fixture postponed, he made the major announcement. Australia Test Tour of South Africa 2021 Postponed Due to Coronavirus Pandemic.

“I really wanted to finish with the upcoming Test series against Australia. That would have felt like it has all come full circle. I had that clarity of mind and heart, and even though the ending is not how I imagined, the clarity remains,” Du Plessis told Independent Media. Notably, the right-handed batsman stepped down as South African captain across formats last year following 1-3 Test series defeat against England at home. However, he continued to serve as a player for bringing down curtains to his red-ball career. Meanwhile, let's look at the cricketer's heartfelt post on Instagram.

One of the most notable wins in Du Plessis’ leadership came against Australia when the Proteas beat them at home in 2018 and away from home in 2016. Nevertheless, the star will continue to serve South African cricket in white-ball cricket and the T20 World Cup later this year would be his prime target.

(The above story first appeared on LatestLY on Feb 17, 2021 11:10 AM IST. For more news and updates on politics, world, sports, entertainment and lifestyle, log on to our website latestly.com).