Unimpressed by Glenn Maxwell's poor show in IPL 2020, Virender Sehwag took a dig at the all-rounder's heavy price tag and called him ‘10 Crore Cheerleader.’ Reacting to the jibe, the KXIP star said: Viru is pretty outspoken with his dislike of me, and that’s fine. He’s allowed to say whatever he likes. He’s in the media for such statements." 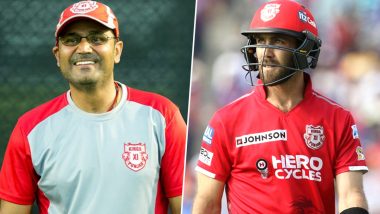 A lot was expected from Australian dasher Glenn Maxwell in Dream11 Indian Premier League (IPL) 2020 as Kings XI Punjab (KXIP) bought him for a whopping INR 10 crore in auctions. However, the all-rounder failed terribly in the season and faced heavy criticism. In 13 games, the right-handed batsman scored just managed to score 108 runs at a mediocre strike rate of just over 100. Fans and experts were indeed not impressed by Maxwell’s poor show and former Indian opener Virender Sehwag also belonged to that category. Taking a jibe at Maxwell’s price tag, Sehwag on his show,  Viru ki Baithak, had called Maxwell ‘10 crore cheerleader.’

“Glenn Maxwell. This 10 crore cheerleader proved very costly for Punjab. His IPL routine for the last few years has been of shirking from work but this season he broke that record as well. This is what you call a highly paid vacation.” Sehwag – who is known for his cheeky sense of humour – had said.

Reacting to the jibe, Maxwell opined that his former KXIP teammate is open about his disliking for him and it’s fine as Sehwag is in media to make such comments. “It’s ok. Viru is pretty outspoken with his dislike of me, and that’s fine. He’s allowed to say whatever he likes. He’s in the media for such statements, so that’s fine. I deal with that and move on, and take it with a grain of salt with Sehwag,” Maxwell told The West Australian. Mohammad Shami Is Best Yorker Bowler in Competition Right Now, Says Glenn Maxwell.

Maxwell and Sehwag shared dressing rooms for KXIP from 2014 to 2017 IPL seasons. While Sehwag played as a batsman in 2014 & 2015, he worked as a mentor in the other two seasons.

(The above story first appeared on LatestLY on Nov 20, 2020 01:54 PM IST. For more news and updates on politics, world, sports, entertainment and lifestyle, log on to our website latestly.com).