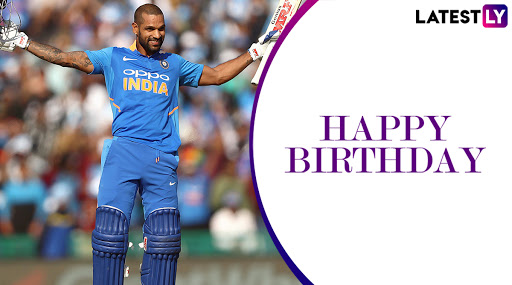 Indian Team’s ‘Gabbar’ Shikhar Dhawan will celebrate his 34th birthday on Thursday (December 5). The opener is known for his flamboyant and jolly nature on the cricketing field, a player who plays with a smile on his face, no matter the conditions and his attitude certainly gives enough positive vibes in the dressing room. Dhawan is a man for big occasions as the southpaw always performs for his side when the stakes are high. The left-handed opener was the highest run-scorer for India during their 2013 and 2017 ICC Champions Trophy campaign in England as well as during the 2015 World Cup which was played in Australia. On the occasion of Gabbar’s birthday, we take a look at some of his best knocks. Shikhar Dhawan Injury Update: Sanju Samson Replaces Injured Opener In India vs West Indies T20Is 2019 Series Starting From December 6.

Shikhar Dhawan started his cricketing journey for Delhi Under-16s in the 1999/00 Vijay Merchant Trophy and was the leading run-scorer in the 2000/01 edition. After playing for India at the Under-17 and Under-19 levels, he made his first-class debut for Delhi in 2004. At the 2015 World Cup, he was India’s highest run-getter and later in the same year became the fastest Indian to reach 3000 ODI runs. In December 2017, Dhawan became the 2nd fastest Indian to reach 4000 runs in ODI. The left-handed opener also holds the record for most runs in a calendar year in Twenty20 International cricket with 689 runs in 2018.

One of Dhawan’s best T20I innings came against West Indies in a nail-biting encounter. The Caribbean side put on a massive total of 182 in front of India. While chasing the total, India got off to a poor start as they lost Rohit Sharma and KL Rahul before the 50-run mark. Shikhar Dhawan along with Rishabh Pant stitched up a partnership of 130 runs and got the Men in Blue over the line. His innings of 92 runs in 62 deliveries included 10 fours and two massive sixes.

Shikhar Dhawan’s Test debut was one to remember as the south-paw scored a massive score of 187 runs in his first-ever match in the longest format. The left-hander replaced Sehwag during this series and was proven to be an apt successor to the former Indian opener. He stitched up a massive partnership of 289 with Murali Vijay for the first wicket. The unique thing about this innings was that the opener played with a strike-rate of over hundred as he scored 187 runs in 174 balls.

The same year in which Gabbar scored his maiden Test century, the southpaw also scored his first ODI century during India’s opening match of the 2013 ICC Champions Trophy. He stitched up a 67 run opening partnership with Rohit Sharma and even after Sharma’s departure he continued India’s momentum. His 94 ball 114 was laced with 12 fours and one six as it helped India to reach a massive total of 331.

Shikhar Dhawan smashed his highest score in ODIs against Australia, signaling a return to form after some not-so-impressive scores, as India put on a massive total of 358/9. This was the southpaw's 16th ODI hundred as his innings helped the Men in Bluer to beat the Aussies and level the series. His knock contained 18 fours and 3 sixes.

Another big game, another match-defining knock from India’s Gabbar. The Men in Blue had not managed to beat South Africa in World Cup encounters on three previous attempts, while the history changed in 2015 when Dhawan took the game to the Proteas. The southpaw scored 137 off 146 balls which included 16 boundaries and 2 sixes and helped India to reach 307 in their 50 overs. India won the match easily as South African batsmen were no match for the Indian bowlers.

Shikhar Dhawan will miss the upcoming series against West Indies as the left-hander sustained a deep cut on his left knee during Delhi vs Maharashtra match in Syed Mushtaq Ali Trophy 2019. The southpaw is replaced by young wicket-keeper batsmen Sanju Samson in the Indian Squad.