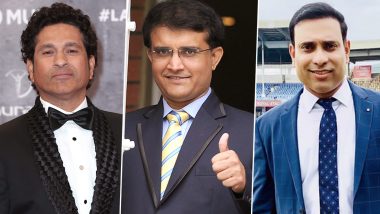 Former Indian captain and current BCCI President Sourav Ganguly celebrates his 48th birthday on Wednesday (July 8) and wishes are pouring in for the legendary cricketer from all around the globe. The southpaw was a fearless captain and magnificent batsman who guided India to many prominent victories. In fact, Ganguly is known to have changed the face of Indian cricket as he inserted belief in the team to win overseas. In fact, he also led the Men in Blue to the finals of ICC Cricket World Cup 2003. On the occasions of Ganguly’s special day, many prominent members of cricket fraternity like Sachin Tendulkar and VVS Laxman took to social media and extended greetings to him. Sourav Ganguly Birthday Special: Rare Pictures of Dada From His Playing Days (See Pics).

Making his ODI debut in 1992, Ganguly didn’t make an emphatic start to his career as he wasn’t able to cement his place in first few years. However, he scored a century at Lord’s on his Test debut in 1996 and didn’t look back after that. Although, he could score runs all over the park. However, it was his ability to hit the ball in the off-side region which earned him the title ‘God of Off-Side.’ Meanwhile, let’s look at how cricket stars wished Ganguly. Sourav Ganguly Birthday Special: Here's a Proof Why Former Indian Skipper Was Called ‘God of Off-Side.’

Hope our off-field partnership keeps going strong like our on-field ones. Wish you a blessed year ahead. pic.twitter.com/jOmq9XN07w

Many more happy returns of the day @SGanguly99 . May you taste ever more success and receive more and more love. Have a great day and year ahead #HappyBirthdayDada pic.twitter.com/j53UUDerJE

Happy birthday dada! From a great captain to a brilliant administrator, you have donned them magnificently. Hope you continue your good work for the betterment of Indian cricket... Godspeed. @SGanguly99 #HappyBirthdayDada pic.twitter.com/DMAogyHtvH

Happy birthday to one of 🇮🇳's most successful captains, Sourav Ganguly 🙌 pic.twitter.com/7MJe1cXcVS

The southpaw bid adieu to international cricket in 2008 but 7212 and 11363 runs from 113 Test matches and 311 ODIs. However, his services to Indian cricket weren’t over even after retirement. In 2019, Ganguly was appointed as the president of Board of Control for Cricket in India (BCCI). Since then, he has done a lot for the Indian cricket. In fact, India also went on to hosted its maiden Day-Night Test versus Bangladesh under his reign.

(The above story first appeared on LatestLY on Jul 08, 2020 10:37 AM IST. For more news and updates on politics, world, sports, entertainment and lifestyle, log on to our website latestly.com).