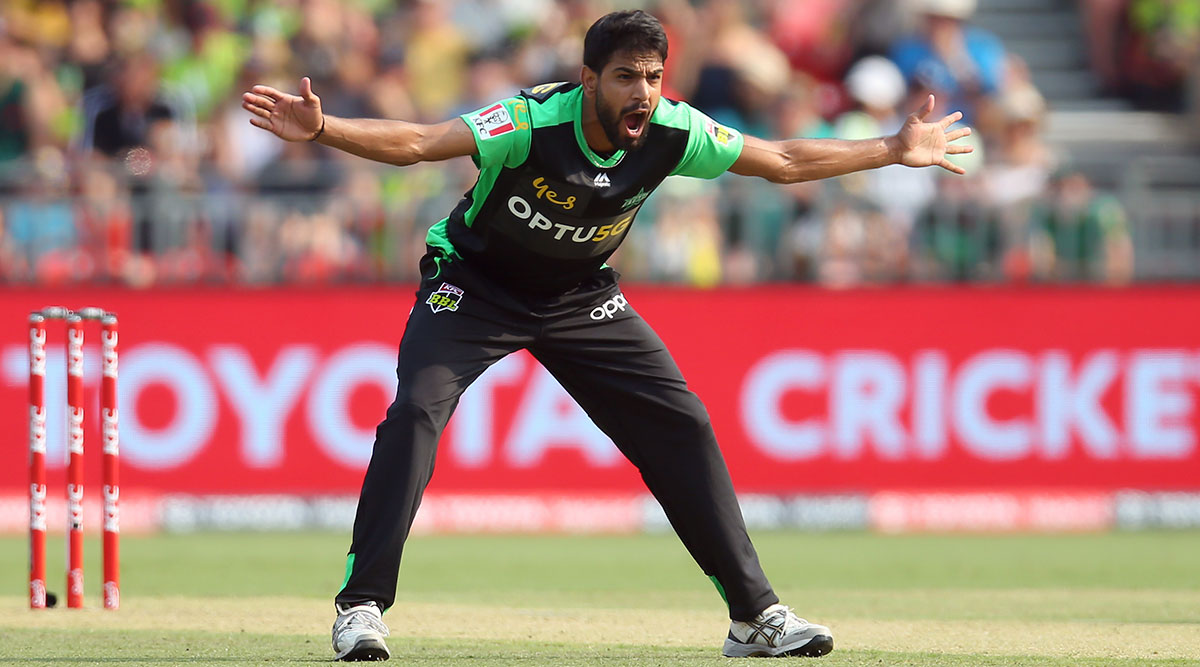 Haris Rauf claimed his maiden hat-trick in T20 cricket during the Melbourne Stars vs Sydney Thunder match in 2019-20 Big Bash League. The 26-year-old pacer from Pakistan also became the first-ever Melbourne Stars cricketer to achieve the feat when he caught Daniel Sams plumb in front of the wicket in the fourth delivery of final over in Sydney Thunder’s innings. Rauf, who replaced Dale Steyn in the Melbourne Stars team in BBL 2019-20, finished with figures of 4 overs 23 runs and 3 wickets. His remarkable feat added more cherry to the Australian franchise T20 competition with Rauf becoming the second player after Rashid Khan to take a hat-trick on January 08, 2020 (Wednesday). Rashid Khan Hat-Trick Video: Afghanistan Spinner Records Another Incredible Feat.

Rauf, who has enjoyed a stellar campaign for the Melbourne Star ever since replacing South African speedster Steyn in the BBL, also jumped to 2nd in the list of highest wicket-takers in BBL 2019-20 with this milestone. Rauf came to bowl the final over of Sydney’s innings wicket-less after three overs. But all changed within 4 deliveries into the final over of the 1st innings.

That Moment of Joy For Rauf!!

Haris Rauf claims the second 🎩🎩🎩 of the day! pic.twitter.com/s1tTHG8xnA

The 26-year-old removed Matthew Gikes in his 2nd delivery with a brilliant cutter before going through Callum Ferguson with his next ball. Rauf then completed his hat-trick after scalping Daniel Sams LBW to reach his milestone and set on a celebratory run.

Signed by the Melbourne Stars – after they watched him in the 2018 Abu Dhabi T20I competition and for Lahore Qalandars – as a replacement for the injured Steyn, Rauf now has 13 wickets from just 4 games in BBL 2019-20. The 3/28 he achieved against Sydney Thunders isn’t even his best figures in the competition. He had taken 5/27 Hobart Hurricanes in his only second appearance in the Big Bash League.

It was joy double for the Asian cricketer in the Australian league with Rashid Khan taking his third career hat-trick earlier in the day. Rashid, Afghanistan’s captain, achieved the feat for Adelaide Strikers against the Sydney Sixers and finished with figures of 4/22 in the match. Rauf’s hat-trick was the sixth in the history of the Big Bash League.