Hasan Ali picked 3/32 from 8.2 overs while Usman Khan scalped 4/36 in his ten as Pakistan restricted Zimbabwe to paltry 192. 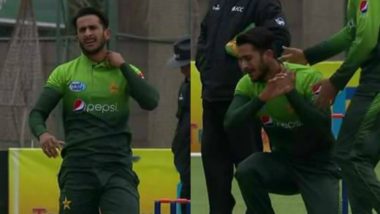 Hasan Ali’s trademark ‘Bomb-Explosion’ celebration turned painful when on Monday the pacer celebrated a fall of a wicket during Zimbabwe vs Pakistan second One-Day International. After picking his second wicket in the match, Ali celebrated in his usual style, but then he pulled the shoulder muscle and was seen in pain with his teammate surrounding him. It appeared as if his neck was stiffed. Ali’s celebration style acme famous during the ICC Champions Trophy last year as he was instrumental in helping Pakistan win the tournament. PAK vs ZIM 2nd ODI Full Scorecard.

Meanwhile, Pakistan took a 2-0 lead in the five-match ODI series. After winning the first ODI by runs, the Green Shirts continued their good form and emerged victorious by nine wickets in the second match.

Ali picked 3/32 from 8.2 overs while Usman Khan scalped 4/36 in his ten as Pakistan restricted Zimbabwe to paltry 192. In response, Pakistan chased down the total in 36 overs at the loss of Imam-ul-Haq’s wicket, who shared 119-run stand for the first wicket with Fakhar Zaman.

Fakhar carried his bat through as he slammed his career’s second ODI ton. The left-handed batsman is in good form and during his unbeaten 117, he scored 117 runs off 129 balls. After the match, Fakhar said, “when you are in form, giving your 100-percent in the nets, you will succeed. When you are in good form you should capitalise and it was my day when I batted till the end. Imam was a bit unlucky but I carried on till the end. The wicket in the second innings was really good; it was good in the first innings as well, unlike the last game.”

(The above story first appeared on LatestLY on Jul 16, 2018 09:56 PM IST. For more news and updates on politics, world, sports, entertainment and lifestyle, log on to our website latestly.com).