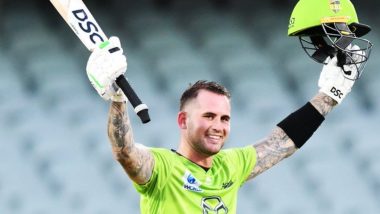 Sydney Thunder broke the highest team total record in the big Bash League (BBL) during the 46-run win over rivals Sydney Sixers. Thunder posted 232 for five in their allotted 20 overs to break the previous record of 223/8 set by Hobart Hurricanes in 2017 against Melbourne Renegades. Thunder thanks to Alex Hales’ 110 off 56 balls posted the mammoth target. Ben Cutting provided his side with an impetus towards the end with an unbeaten 33 off 14 balls. Michael Neser Takes One-Handed Stunning Catch During Adelaide Strikers vs Brisbane Heat BBL 2020–21 Match (Watch Video).

Sydney Sixers failed to chase the total and managed 186 for five in their allotted overs. Interestingly, Thunder’s previous highest total of 219/7 against Melbourne Stars was scored just last month. They now feature twice on the list of highest team totals in BBL.

The ongoing season is the tenth edition of the BBL, which started in 2011. BBL is an eight-team event. Currently Sydney Sixers lead the points table with 32 points. Sydney Thunder, on the other hand, are paced on third.

(The above story first appeared on LatestLY on Jan 22, 2021 05:48 PM IST. For more news and updates on politics, world, sports, entertainment and lifestyle, log on to our website latestly.com).