Ellyse Perry had been in fine form in 2019 with the Australian all-rounder smashing three international hundreds in the ongoing calendar year, including an Ashes Test century which helped Australia clinch the Ashes trophy. Perry, 29, averaged 73.50 with the bat in 12 ODI matches in 2019 and also took 21 ODI wickets, which includes the Australian record of 7/22. 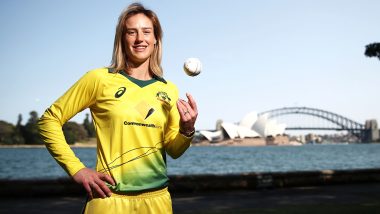 Australian duo Ellyse Perry and Alyssa Healey walked away with the top honours as the International Cricket Council (ICC) announced its best women’s ODI and T20I cricketer of the year on December 17, 2019 (Tuesday). Perry, who recently became the first women’s cricketer to complete 1000 runs and also take 100 wickets in Twenty20 international cricket, was also named the ICC Women’s Cricketer of the Year making it for the second time in three years that she has won the prestigious Rachael Heyhoe-Flint Award. Her national team batting opening partner Healy was named the ICC Women’s T20I Cricketer of the Year while Perry took the ODI Women’s Cricketer of the Year trophy home. Meanwhile, ICC also announced its women’s ODI and T20I Team of the Year with fellow Australian Meg Lanning named the captain of both the teams. Laura Marsh, Three-Time World Cup Winner With England, Announces International Cricket Retirement.

Perry had been in fine form in 2019 with the Australian all-rounder smashing three international hundreds in the ongoing calendar year, including a match-winning Ashes Test century which helped Australia blank England and clinch the Ashes trophy. Perry, 29, averaged 73.50 with the bat in 12 ODI matches in 2019 and also took 21 ODI wickets, which includes the Australian record of 7/22. “It's an amazing honour and I'm a little bit shocked, given how many amazing performances there have been across the year,” the Australian all-rounder was quoted as saying by ICC. "It's amazing to be acknowledged and I do truly appreciate it. It’s a really nice way to finish the year on a personal note." Check Complete Winners' List.

She was absolutely outstanding in 2019, her exploits including Test and ODI centuries. She was fantastic with the ball as well.#ICCAwards pic.twitter.com/lclLvkP3Jn

And the 2019 ICC Women's ODI Cricketer of the Year is Ellyse Perry!

The star 🇦🇺 all-rounder scored 441 runs at 73.50 and claimed 21 wickets at 13.52 this year!#ICCAwards pic.twitter.com/zfrnIzKdQV

Australia's Meg Lanning has also been named the captain of the 2019 ICC Women's ODI Team of the Year 🙌#ICCAwards pic.twitter.com/idqWzmN93m

Meanwhile, Australian wicket-keeper-batswoman Healy, who for the second year in succession clinched the T20I cricket of the year trophy also thanked the apex cricket body for recognizing their efforts. “I'm really pumped to be awarded the T20I Cricketer of the Year," she told the Cricket Council. The 29-yer-old opening batswoman smashed a world record 148 runs from just 48 deliveries against Sri Lanka in March, which is the highest T20I individual score in women’s T20I cricket.

She broke the record for the highest score in women's T20Is with a blistering 148* against Sri Lanka this year 🤩#ICCAwards pic.twitter.com/ObiIfcog31

Here's the ICC Women's T20I Team of the Year, with Meg Lanning as the captain!#ICCAwards pic.twitter.com/LaAnZE5YH3

"The Australian women's team had a fantastic 12-month period and we played some really consistent T20 cricket. Whilst the individual award is really nice for me personally, I think it was great to see our team play so well throughout that 12-month period, especially leading into a home World Cup in 2020."

The 2019 ICC Women's Emerging Cricketer of the Year is Thailand's Chanida Sutthiruang! 👏

Among the other winners was Thailand fast bowler Chanida Sutthiruang, who won the ICC Emerging Women’s Cricketer of the Year. The 26-year-old helped Thailand secure qualification for next year’s Women’s T20 World Cup with 12 wickets in the 2019 ICC T20I Qualifiers. Australia also dominated the ODI and T20I team of the year with a total of five players included in the ODI team, while four were named in the T20I Team of the Year.

(The above story first appeared on LatestLY on Dec 17, 2019 12:56 PM IST. For more news and updates on politics, world, sports, entertainment and lifestyle, log on to our website latestly.com).