With the series already decided, teams fielded a much-changed starting XI with debutants on both sides. However, it was Virat Kohli’s men who came out on top in yet another high-scoring encounter as the Men in Blue registered a 13-run win over Australia at the Manuk Oval to put an end to their five-game losing run in the ODIs. 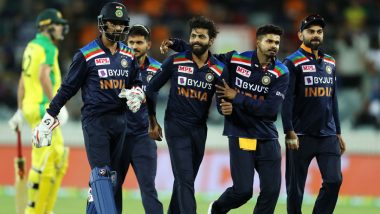 Team India avoided a white-wash as they defeated Australia by 13 runs in the third and final One-Day International of the three-match ODI series at the Manuka Oval Stadium in Canberra on Wednesday. With the series already decided, teams fielded a much-changed starting XI with debutants on both sides. However, it was Virat Kohli’s men who came out on top in yet another high-scoring encounter. India vs Australia 3rd ODI 2020 Highlights.

After winning the toss, India elected to bat first and were off to a shaky start but a brilliant knock from Captain Virat Kohli steadied the ship from the visitors. However, it was the 150-run partnership between Hardik Pandya and Ravindra Jadeja that took the Men in Blue to an above-par score in the game. Both players scored quick-fire half-centuries. T Natarajan First Wicket Video: New Indian Cricket Team Pacer Removes Marnus Labuschagne to Scalp His Maiden International Wicket.

While chasing, a much-changed Australian side struggled as they lost wickets on regular intervals. It was a great day for the Indian bowlers as debutant T Natarajan registered himself on the international level, taking two wickets. Shardul Thakur was the pick of the bowlers with three scalps as Jaspirt Bumrah, Ravindra Jadeja and Kuldeep Yadav also got themselves on the board.

After two disappointing displays, Team India fans were impressed with the performance in the third ODI and praised the Men in Blue on social media. Here are some of the reactions.

Whenever India is in trouble

From Traveling in Mumbai Local Train to Dominating Australia in Australia

Pandya and Jadeja to Australia

Despite the defeat, Australia won the ODI series 2-1 and will look to continue that form in the upcoming T20I series. The first game of the shorter format will be played on December 4th with the next two games coming on a day’s interval. David Warner is set to miss that series after suffering a groin injury in the second ODI.

(The above story first appeared on LatestLY on Dec 02, 2020 05:38 PM IST. For more news and updates on politics, world, sports, entertainment and lifestyle, log on to our website latestly.com).