T Natarajan picked his maiden wicket in international cricket on his India debut. The 29-year-old pacer removed Marnus Labuschagne for his first wicket in ODI cricket and also at the international level. Labschagne was out after edging the ball straight into his stumps when trying to drive an off-stump delivery through covers. 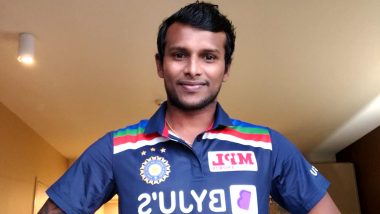 T Natarajan picked his maiden wicket in international wicket after dismissing Marnus Labuschagne in the sixth over of Australia’s innings. Natarajan, who is also making his India debut, gave India the first breakthrough after removing Labuschagne to start his international career in terrific fashion. It has been a fantastic ride so far for the 29-year-old, who was a late nigh inclusion to India’s ODI squad just hours before the start of the first ODI match. Twitterati was all praise for the debutant pacer after he picked his first international cricket. India vs Australia 3rd ODI 2020 Live Score Updates.

Labuschagne was dismissed after soft-edging a fifth-stump delivery from Natarajan into his stumps. The 26-year-old had been promoted as an opening batsman after David Warner’s injury. But Labuschagne, who usually bats at No 4 for Australia, looked unsettled right from the start and was troubled by the angle created by left-armer Natarajan. He perished trying to play his way out. Watch the video of Natarajan's maiden wicket. Hardik Pandya, Ravindra Jadeja Rescue India With Unbeaten 150-Run Stand, Twitterati Praise Duo for Their Fighting Knocks During IND vs AUS 3rd ODI.

LABUSCHAGNE IS OUT ‼️ 😲

The wicket came in the final delivery of the sixth over. Natarajan bowled a length delivery and Labuschange immediately looked to pounce on it but was cramped for room while trying to drive the ball through covers and perished after inside-edging the ball into his stumps. Twitter praised the debutant for his maiden wicket. Take a look at some reactions on Twitter.

A big wicket on debut 👏👏

May He Continue to Shine...

First wicket for Nattu in his International career. May he shine like this throughout his career 💥❤️.#Nattu #Natarajan #INDvAUS #AUSvIND @Natarajan_91 pic.twitter.com/x06mv6oy9E

T Natarajan First International Match against Australia in under pressure and picked Wicket in his first Match. What a moment for T Natarajan👏👏!! Incredible. Nattu. #AUSvIND pic.twitter.com/0IXXZEkWIS

Natarajan burst into the limelight with his performances in the recently concluded Indian Premier League (IPL) season 13. The Sunrisers Hyderabad pacer took 16 wickets in as many matches and was crucial in his side reaching the IPL playoffs. The best aspect of his bowling was his pinpoint yorkers and Natarajan bowled the most yorkers in IPL 2020. He is also part of India’s T20I squad and is expected to play all three matches.

(The above story first appeared on LatestLY on Dec 02, 2020 02:12 PM IST. For more news and updates on politics, world, sports, entertainment and lifestyle, log on to our website latestly.com).