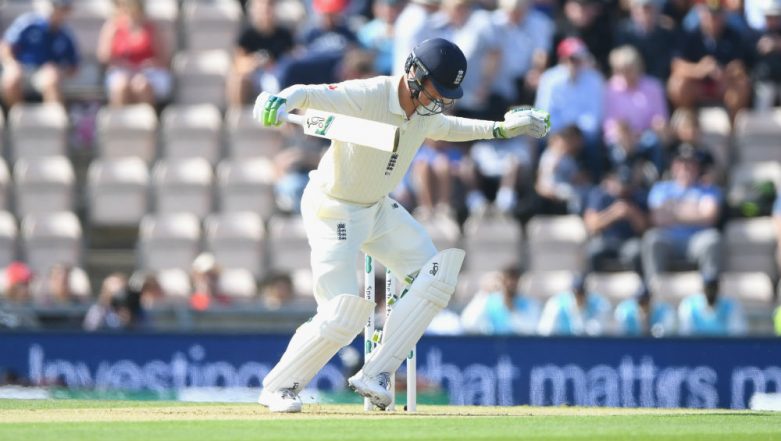 England batsman Keaton Jennings is given out LBW during day one of the 4th Test Match against India at The Ageas Bowl. (Photo: Getty Images)

Indian pacers wrecked England's top order, taking four quick wickets to reduce the hosts to 57/4 at lunch on the opening day of the fourth Test of the five-match rubber at the Rose Bowl Cricket Ground. Electing to bat on a track with a tinge of live grass, England's opening woes continued to haunt them as Keaton Jennings was trapped plumb in front by an excellent incoming delivery from Bumrah, for a duck in the third over of the innings. Jennings was confused whether to leave the ball or not, which came into the left-hander.

One over later, Bumrah almost packed back English skipper Joe Root(4) when he was on two before the Decision Review System (DRS) came to the latter's rescue. Root was trapped plumb in front but television replays showed the bowler overstepping. The England captain, however, failed to take advantage of the reprieve as Ishant swung it big into the England captain to trap him lbw. IND vs ENG 4th Test Day 1 Live Score Updates.

Reduced to 15/2, England's hopes were pinned on former skipper Alastair Cook (17) and Jonny Bairstow (6), playing as a specialist batsman after injuring his finger. But Bumrah nipped any such ambitions in the bud with the scalp of Bairstow, caught behind by Rishabh Pant in the 13th over before first-change bowler Hardik ended Cook's 55-ball resistance, thanks to a brilliant low catch at third slip by Virat Kohli.

India could have had Buttler too, but Pant missed a tough one. Together with Stokes, Buttler managed to see off the initial scare from the Indian pace attack before heading for lunch undivided. For India, Jasprit Bumrah (2/21), Ishant Sharma (1/7) and Hardik Pandya (1/16) were among the wickets even as Mohammed Shami, coming in as the second change bowler, constantly kept asking questions to the vulnerable English pair. (Inputs IANS).