India might have clinched the series opener but the Kiwis are still ahead in the head to head record. In the 12 T20 International matches played between the two sides, the Black Caps have won eight matches while India have just registered four victories. Nevertheless, if India manage extend their golden run they could better their record at the end of the series. 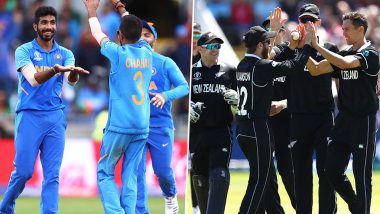 After defeating New Zealand in the series opener by six wickets, Virat Kohli and Men will eye to put the foot on the paddle and clinch the next clash too. The second T20I of the series will be played on January 26 at the same venue i.e. Eden Park in Auckland. KL Rahul and Shreyas Iyer were the stand-out performers for the Men in Blue as they both mustered quick-fire half-centuries and helped their side chase down a total of 204 runs. On the other hand, the Black Caps also put up a brilliant batting display in the series opener but were let down by their bowlers and must look to settle the scores in the second T20I. New Zealand Vs India, Cricket Score 2nd T20I Match.

India might have clinched the series opener but the Kiwis are still ahead in the head to head record. In the 12 T20 International matches played between the two sides, the Black Caps have won eight matches while India have just registered four victories. Nevertheless, if India manage extend their golden run they could better their record at the end of the series. Meanwhile, let’s look at how the two sides fared in their last five T20I clashes. India vs New Zealand 2nd T20I 2020 Match Preview: Virat Kohli's Men Aim for Another Stellar Show at Eden Park.

Riding on half-centuries by Colin Munro, Kane Williamson and Ross Taylor, New Zealand piled up 203 runs in the first innings and looked all set to win the game. However, KL Rahul gave India a magnificent start in the chase and scored a fantastic half-century. After his dismissal, the baton was passed on to Shreyas Iyer and the youngster rose up to the occasion and guided his side over the line.

After losing the opening game of the series, Rohit Sharma and Men made a brilliant come back in the second T20I to square up the series 1-1. Chasing a total of 159 runs, skipper Rohit Sharma mustered a fifty and gave his side a flying start. Later, MS Dhoni and Rishabh Pant gave their side some finishing touches and ensured India’s victory by seven wickets.

Kiwi wicket-keeper and opener Tim Seifert shone in the series opener with a knock 84 runs off 43 balls. His brilliance guided the home side to 2019/6 in the first innings which proved to be too much for India. Their batting line-up collapsed during the chase and were packed for mere 139 runs, losing the match by 80 runs.

The third T20I of New Zealand’s 2017 Tour of India was another series decider. However, it was India who came on top on this occasion. In a rain-affected encounter, India managed to score 67/5 in their allotted eight overs of the first innings. The target didn’t look much challenging but Jasprit Bumrah bowled a colossal spell and helped his register a six-run win.

With the second match of the series being played at the same ground, India must be high on confidence and will eye to register another thumping victory against the home side. However, the Kiwis have a knack of making a strong come back and taking them lightly will not be wise for the Virat Kohli-led side.

(The above story first appeared on LatestLY on Jan 25, 2020 03:54 PM IST. For more news and updates on politics, world, sports, entertainment and lifestyle, log on to our website latestly.com).