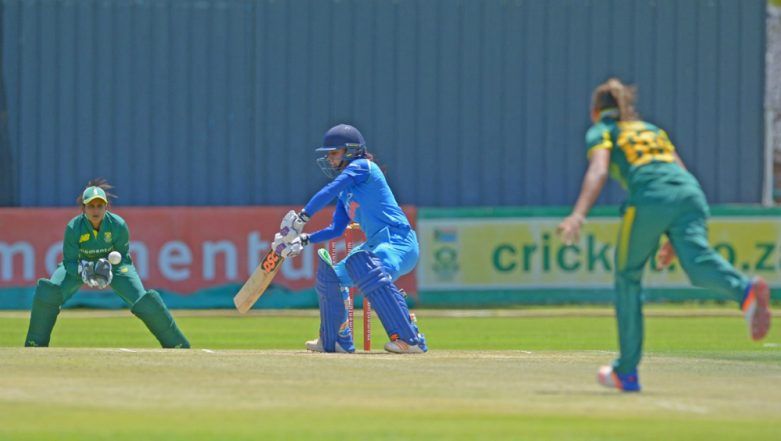 Kimberley, February 5: India produced a clinical all-round performance to thrash hosts South Africa by88 runs in the first one-dayer of the ICC Women's Championship at Diamond Oval. Opener Smriti Mandhana (84 off 98) scored a strokeful fifty while pace duo of Jhulan Goswami (4/24) and Shikha Pandey (3/23) shared seven wickets between them to emerge as the architects of India's victory.

Electing to bat, left-handed batswoman Mandhana hit eight boundaries and a six in her 98-ball innings and shared a 99-run stand with skipper Mithali Raj (45) to help India post213 for seven in their allotted 50 overs.

Chasing 214 for a win, South Africa failed to stitch partnerships and kept losing wickets at regular intervals. Skipper D van Niekerk top-scored for South Africa with a 41. Pandey rocked the hosts early by removing opener LizelleLee (3), wicket-keeper Trisha Chetty (5) and Mignon du Preez(0) to leave them at 23/3 in 9.2 overs.

Spinner Poonam Yadav (2/22) then accounted for the other opener Laura Wolvaardt (21), while Goswami trapped Chloe TryonLBW as South Africa lost half their side in 22.5 overs.

Marizanne Kapp (23) and Niekerk tried to resurrect the run chase but Yadav sent the former back to the hut and left-arm spinner Rajeshwari Gayakwad removed the home side skipper after they reached the 100-mark. Goswami then mopped up the tail, dismissing the remaining three batswomen -- Ismail (4), A Khaka (2) and M Klaas (1) --to complete the win.

Game over! #ProteasWomen are all out for 125 meaning the @BCCIWomen have won the first ODI by 88 runs!

Earlier electing to bat, India lost their first wicket when Ayabonga Khaka dismissed opener Punam Raut (19) with Shabnim Ismail taking the catch. Mandhana and Raj then steadied the ship before the opener was removed by Khaka with Sune Luus taking the catch.

Next over, Masabata Klaas got rid of Raj as India slipped to 155/3 in 36.1 overs. South Africa then effected two runouts, dismissing V Krishnamurthy (2) and DB Sharma (6) to further reduce the visitors to 168-5 in 42 overs.

H Kaur and wicket-keeper S Verma then added 27 runs before the former was trapped by Kapp in the 48th over. Two balls later, Verma was caught by Khaka off Kapp.