One of the direct effects of the final being shunted out is that should defending champions Chennai Super Kings make yet another final, they lose out on their home advantage. 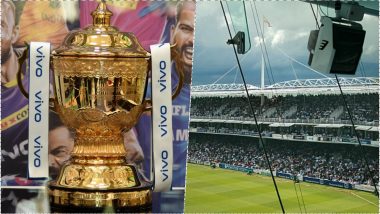 The IPL Governing Council has decided to the shift the VIVO Indian Premier League 2019 final to the iconic Lords Stadium in London as a direct result of the impending Indian General Election or Lok Sabha Elections 2019. Interestingly, England is also the venue of ICC's flagship event, ICC Cricket World Cup 2019. Chennai Super Kings won the last edition of the tournament meaning the final was set to take place in the MA Chidambaram Stadium in Chennai. But the authorities felt it will not be possible for them to manage the two events simultaneously. It is interesting to note that there were talks of the Indian Premier League 2019 being shifted out of India either fully or partially, but the governing council through its meticulous planning saved the day for the board. IPL 2019 Schedule Till May 5 Out: Full Time Table of Vivo Indian Premier League 12 League Stage Fixtures, Dates, Venue Details and Match Timings Announced.

One of the direct effects of the final being shunted out is that should defending champions Chennai Super Kings make yet another final, they lose out on their home advantage. The CSK fans will be gutted if it is indeed the situation. Another important consideration is that the final of a mega event like the IPL attracts a lot of crowd from all over India. Failure to host the final in India not only leads to a reduction in revenue but for those neutral fans that want to view the final and experience the thrill in the stadium, it is a lost opportunity. It is not as if the Board did not hold back channel talks with the authorities on the ground. But once they failed to get the clearances a quick decision had to be made. Lok Sabha Elections 2019 Schedule: Voting In 7 Phases From April 11 to May 19, Counting And Results On May 23; Check All Dates For General Elections.

A lot of fans must be wondering why London is the preferred choice for hosting the 2019 IPL final. Our sources in the board say that though it is a high-cost option compared to UAE or South Africa, Lords guarantees a profit. With the cash-rich league quite popular in England, the huge Indian diaspora in the UK should provide the necessary numbers needed to make the final a huge success. The England and Wales Cricket Board have assured all support to the Indian board in hosting the mega event. Since they are also hosting the 50 overs World Cup starting May end, it is a double bonanza for the country. The ICC have cleared the joint proposal of the two boards in accommodating the sudden change in plans. ICC Cricket World Cup 2019 Schedule in PDF: Ticket Prices, Dates, Venue Details & Timetable Available for Download Online.

It is to be noted that the date today is April 1, which is known as April Fool's Day. The above article is a celebration of the same (a work of fiction). The IPL final is going nowhere and all the cricket lovers in Chennai need not worry about their city losing the right to hold the final. Happy April Fool's Day.

(The above story first appeared on LatestLY on Apr 01, 2019 12:03 AM IST. For more news and updates on politics, world, sports, entertainment and lifestyle, log on to our website latestly.com).