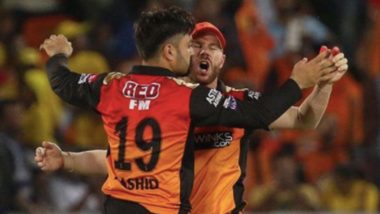 There is still time left before players begin preparations for Indian Premier League 2020 (IPL). However, Australian batsman David Warner is ready for IPL 2020, at least on social media. The recently appointed Sunrisers Hyderabad (SRH) captain took to Instagram and posted an old photo of him and his IPL teammate Rashid Khan. In the picture, posted by Warner, he and Khan can be seen celebrating a fall of a wicket. What's interesting is that in this year's IPL, players will have to follow social distancing norms and hugging teammates may not be allowed. IPL 2020 Player Update: Chris Gayle to Join Kings XI Punjab Squad Early in Dubai?

Warner wanted fans to caption the post as he wrote, "caption this!! @rashid.khan19 #tooclose." Fans came up with many captions, but it was the hashtag' too close' that had everyone laughing. Sunrisers wicket-keeper batsman Wriddhiman Saha also posted a comment on the post as dropped' laughing with tears' emoticon. IPL 2020 Players Update: David Warner, Ben Stokes, Steve Smith, Other England and Australian Cricketers to Miss First Few Matches of Indian Premier League Season 13?

The IPL 2020 is all set to begin on September 19 in the United Arab Emirates (UAE) as confirmed by league chairman Brijesh Patel. Warner, who will be captaining SRH, could miss start of the IPL 2020 as he will be in England with the Australian team.

(The above story first appeared on LatestLY on Jul 29, 2020 05:09 PM IST. For more news and updates on politics, world, sports, entertainment and lifestyle, log on to our website latestly.com).