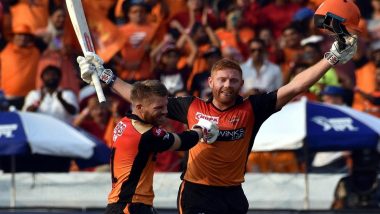 The Indian Premier League 2020 (IPL 2020) is all set to be held in the United Arab Emirates (UAE) with chairman Brijesh Patel confirming the same. The IPL 2020 is scheduled to be held between September 19 and November 08. The Indian players and cricketers from other parts of the world are expected to land in the UAE by August 20 to begin preparations for IPL 2020. However, some of England and Australian players like David Warner, Steve Smith, Jofra Archer, Pat Cummins and Ben Stokes could miss the start of IPL 2020 as the two teams will be locked in a bilateral series which will reportedly end on September 16. Virat Kohli-Led RCB Title Favourites for IPL 2020, Says Brad Hogg; Former KKR Bowler Also Rates Mumbai Indians to Win Indian Premier League 13.

Australia’s tour of England, which was originally scheduled in July, could be held between September 04 to 16 as per some reports. The two teams will face-off in three T20Is and three One-Day Internationals (ODIs). As the series ends on September 16, the players will then likely leave for Dubai the next day.  AB de Villiers, Imran Tahir & Other South African Players Could Miss Out on IPL 2020 Despite NOCs by CSA: Report.

Upon arrival in Dubai, the England and Australian players could be required to undergo COVID-19 Tests. The players could be asked to go into a precautionary quarantine for 7 to 10 days as per the likely directives to be set by the Board of Control for Cricket in India (BCCI). So, that means these players will miss out on some initial matches of IPL 2020 before joining the respective franchises.

(The above story first appeared on LatestLY on Jul 26, 2020 07:43 PM IST. For more news and updates on politics, world, sports, entertainment and lifestyle, log on to our website latestly.com).