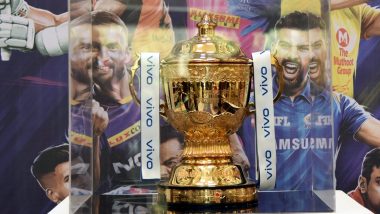 Government of India has finally given permission to Board of Control for Cricket in India (BCCI) to hold the Indian Premier League 2020 (IPL 2020) in the United Arab Emirates (UAE). IPL chairman Brijesh Patel confirmed the same to ANI. Earlier, while seeking permission for the league to be held in the UAE, IPL governing council had set September 19 as the start date for the season 13 of the league. IPL 2020 Sponsor: Patanjali Considering Indian Premier League Season 13 Title Sponsorship.

Dubai, Abu Dhabi and Sharjah will host the matches, which are expected to be played behind the closed doors. Earlier, the IPL 2020 was scheduled to begin on March 29 but was postponed indefinitely due to coronavirus pandemic. "We have got the official permission from the government to hold Indian Premier League (IPL) in UAE," Brijesh Patel was quoted as saying by ANI. IPL 2020 Captains List: From MS Dhoni to Virat Kohli, Check Out Skippers of All 8 Teams in Indian Premier League 13.

We have got the official permission from the government to hold Indian Premier League (IPL) in UAE: Brijesh Patel, IPL Chairman pic.twitter.com/UCG7fNnmw5

After the ICC T20 World Cup 2020, which was scheduled for October-November in Australia, was cancelled, BCCI decided to go ahead and conduct the T20 league in the vacant window.

The franchises are expected to gather players around mid-August before heading to the UAE. The IPL 2020 will end on November 10. IPL governing council earlier released some SOPs ahead of the league and is expected to roll out the schedule soon.

(The above story first appeared on LatestLY on Aug 10, 2020 06:30 PM IST. For more news and updates on politics, world, sports, entertainment and lifestyle, log on to our website latestly.com).