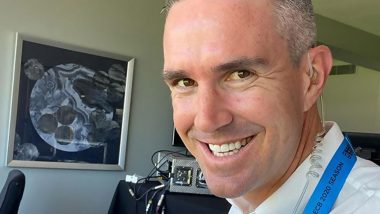 Ahead of the upcoming Indian Premier League (IPL), former England captain Kevin Pietersen opened up on how the Twenty-20 cricket extravaganza will be different this year due the ongoing Covid pandemic. "It's going to be different for sure. No fans, nothing. Everybody is in bubble and the team that copes with its bubble life the best is the team that's going to win. This is a new territory for everyone," Pietersen told IANS. R Ashwin Reacts as Fan Asks Delhi Capitals Spinner to ‘Learn’ From Mitchell Starc’s ‘Mankading’ Warning

KP, as he is fondly known in the cricketing circuit, is currently a part of the commentary panel for IPL 2020, which is set to start on September 19 in the UAE. During his playing days, Pietersen represented the Delhi Daredevils team (now rechristened Delhi Capitals) in the IPL, besides Royal Challengers Bangalore and Rising Pune Supergiant. He roots for Delhi team to lift the trophy this time. Axar Patel Grabs a Screamer in the Nets Ahead of Delhi Capitals vs Kings XI Punjab, IPL 2020 (Watch Video)

Recalling his IPL journey, he expressed his gratitude to India. "I love the IPL. I love what India has given to me. I love everything about the journey that I have had since 2002 -- the first time I came to India. I am so lucky that I got to experience Indian culture, friendships. I have been benefited financially, I have been benefited emotionally in India. I owe a lot to India," he said, while promoting the National Geographic's documentary, "Save This Rhino", which he called his "greatest gift to India".

(The above story first appeared on LatestLY on Sep 18, 2020 12:19 PM IST. For more news and updates on politics, world, sports, entertainment and lifestyle, log on to our website latestly.com).