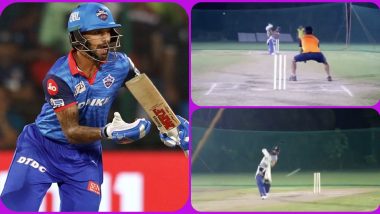 With Indian Premier League 2020 (IPL 2020) confirmed to begin from September 19 in the United Arab Emirates (UAE), players have started to begin preparations for the upcoming season. Latest to hit the nets is Delhi Capitals opening batsman Shikhar Dhawan. The left-hander has been part of Delhi franchise since 2018 after being traded in from Sunrisers Hyderabad (SRH). Dhawan has been active on social media platforms ever since the lockdown and has connected well with the fans. IPL 2020 Squad Updates: AB de Villiers, Ben Stokes, Andre Russell, Lasith Malinga and List of Players Who Could Miss Upcoming Season or Part of it.

Dhawan took to social networking site Twitter and posted a video of him playing a range of shots. "Keeping the intensity going. Love the sound of the bat on ball," tweeted Dhawan along with the video. Indian Premier League 13 Final Likely to Be Postponed From November 8 to 10 to Optimise Diwali Week.

Keeping the intensity going 🔥 Love the sound of the bat on ball 💥 pic.twitter.com/ZuOZ4JYWQ3

Dhawan has been out of action since India's home series against Australia in January earlier this year. The left-handed batsman was subsequently ruled out of New Zealand tour as well. Having fully recovered, The Delhi Capitals batsman will be eager to play some cricket. Dhawan has played 159 IPL matches and has scored 4,579 runs- fifth most run-scorer in the league's history.

(The above story first appeared on LatestLY on Jul 31, 2020 09:03 PM IST. For more news and updates on politics, world, sports, entertainment and lifestyle, log on to our website latestly.com).