IPL 2021 Playoffs Qualification Scenario Explained: Here’s A Look at the Chances of RCB, KKR, PBKS, MI & RR for Making it to Last Four

With nine games remaining, and three playoff qualification spots left, the excitement in IPL 2021 has reached new heights and now, all of the remaining fixtures would be hotly contested as teams look to ensure that they go through to the last four at the end of the league stage. 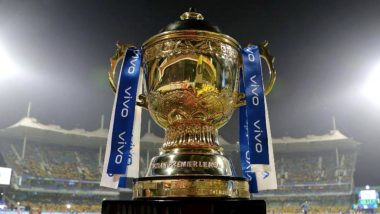 The race for the playoffs is slowly heating up and proceedings have started to become more interesting with every passing game. Delhi Capitals, who have already qualified, strengthened their chances of a top-two finish as they put more pressure on defending champions Mumbai Indians by beating them in a thrilling encounter on Sunday, October 2. The path to playoff qualification indeed becomes more complicated for Mumbai from here on and now, the race to make it to the last four has intensified with nine more league matches to go. After the MI vs DC and RR vs CSK matches on October 2, here is what the points table looks like: VIVO IPL 2021 Purple Cap Holder List

We are assured of the fate of just three teams at the moment. Chennai Super Kings and Delhi Capitals have marched their way to become the first and second to qualify for the playoffs while Sunrisers Hyderabad on the other hand, can no longer make it to the top four, a testament to their poor form this season. Now, the competition is between the other five sides to fill up three spots in the playoffs and cricket fans, brace yourselves for some exciting matches to come! VIVO IPL 2021 Orange Cap Holder List

Well, there is nothing much that this side has to worry about, apart from the fact that they need to win all two of their matches to end the group stage within the top two slots on the points table. And they are most likely to do so as well, given their form. CSK can guarantee a top-two slot by winning both their remaining matches. Though they suffered a loss against Rajasthan Royals, MS Dhoni and co would be confident of a top-two finish.

The Rishabh Pant-led side has become the second side to qualify for the IPL 2021 playoffs and now, they need to win the remaining matches in order to finish in the top two. The IPL 2020 finalists, who are placed second with 18 points from 12 games, have been dominant all season and now they have the luxury of having two more matches left in order to secure a top-two finish, the chances of which got boosted with their win over Mumbai Indians on October 2.

Royal Challengers Bangalore have looked a different team ever since their 54-run win over Mumbai Indians last weekend and now, they are comfortably placed in the third spot with 14 points from 11 matches. Virat Kohli's side further, defeated Rajasthan Royals in their last game and now, they need to win one of their remaining three fixtures to guarantee a spot in the playoffs as they would then have 16 points, which cannot be surpassed by any of the sides who are placed from the 4th to the 7th position on the points table. Bangalore can get to 20 points maximum, which can make them a contender for the top-two slot, provided they rectify their net run-rate (-0.200) and CSK and DC lose both their remaining games.

Now this is where things get interesting. All the suspense, excitement and tension regarding qualification for the playoffs would involve these four sides (KKR, PBKS, RR and MI) as they all are locked on 10 points. The maximum that these teams can get to, is 14 points Kolkata Knight Riders were looking good for qualifying for the playoffs but a loss to Punjab Kings on October 1 have now opened up the race further. The two-time champions now need to win their remaining two fixtures and hope that Mumbai Indians and Punjab Kings doesn't win more than one match out of their remaining two fixtures. It has to be said that if such a scenario arises where KKR is tied with any of the other three sides (PBKS, RR and MI) on points, then they are likely to go through due to a superior net run-rate,  (+0.302). That is, only if they are able to maintain this in the next games.

Punjab Kings have once again engaged themselves in the race to make it to the playoffs with a win over KKR on October 1 and now, they are level on points with the 2014 champions and are behind only due to an inferior net run-rate.

They would now need victories in both their two remaining fixtures and also would need Kolkata Knight Riders (KKR) and Mumbai Indians (MI) to lose at least one of their matches to make sure that they make it to the playoffs. In that case, Punjab would make it to 14 points and KKR and MI would have 12 points each. That way, Punjab walks into the final four with more points. Their win against KKR might just be a resurgence and the PBKS camp would be hopeful of a turnaround from here on.

Rajasthan Royals spiced up the playoffs race with a breathtaking victory against already qualified Chennai Super Kings. Shivam Dube and Yashasvi Jaiswal not only helped them chase down a tough total with overs remaining, they also boosted Rajasthan's chances of qualifying for the playoffs. Placed sixth after 11 games with 10 points, they would need to win both their matches (preferably by big margins to better their net run-rate, which is -0.337) to have a chance at qualifying for the playoffs. They would also want Mumbai Indians, Punjab Kings and Kolkata Knight Riders to lose one out of their two remaining matches.

The problems increased for Mumbai Indians as they suffered a four-wicket defeat to Delhi Capitals on October 2.  Now they are left with two more matches and Rohit Sharma's side have to win both these games, preferably by big margins and also hope KKR and PBKS lose one each out of their two remaining fixtures. Mumbai, in such a scenario, would qualify provided they would have more points (14). If they are tied with any of these sides on points, then a superior net run rate would help them qualify, provided they rectify their current one, which is -0.453.

Well, there is nothing much left to speculate for Sunrisers Hyderabad as they have already crashed out of the playoffs race, something that looked inevitable ever since they started losing their matches in the UAE leg of IPL 2021. Now, all they can do is spoil the party for the other sides and perhaps, walk out of the competition with confidence and some points, preferably!

Cricket fans would not want to miss any of these matches from here on as every result would have a bearing on the points table. So who would eventually make it to the last four in IPL 2021? Stay tuned for some riveting cricket to follow!

(The above story first appeared on LatestLY on Oct 02, 2021 02:28 PM IST. For more news and updates on politics, world, sports, entertainment and lifestyle, log on to our website latestly.com).