IPL 2021 Suspended: Rajasthan Royals Are Most Profited Team with the Tournament Postponed, Here’s Why

Although being in the mid-table after the first half isn’t worse, Rajasthan Royals would be enthralled with the tournament postponed. After all, RR were missing the services of two of their most prominent players this season, Jofra Archer and Ben Stokes. 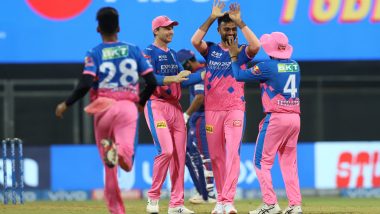 Cricket fans worldwide are disappointed with the VIVO Indian Premier League (IPL) 2021 postponed indefinitely. The Board of Control for Cricket in India (BCCI) had to suspend the gala tournament after several players contracted the COVID-19 virus. While teams like Delhi Capitals, Royal Challengers Bangalore and Chennai Super Kings would have been disheartened as they were doing exceptionally well this season, Rajasthan Royals would be the happiest of all eight teams. At the time of suspension, the Sanju Samson-led side was fifth in the team standings with three victories in seven matches IPL 2021 Suspended Owing to Increase in Covid-19 Cases Within the Bio-Bubble.

Although being in the mid-table after the first half isn’t worst, the Men in Pink would be enthralled with the tournament postponed. After all, RR were missing the services of two of their most prominent players this season, Jofra Archer and Ben Stokes. While Archer was ruled of the tournament without playing any games due to his knee problems, Stokes sustained a finger injury during Rajasthan’s first match against Punjab Kings and had to leave the side. Nevertheless, the England duo is all but likely to be recovered before the season resumes. Hence, Sanju Samson’s men, who have done a decent job this season, would become an even more formidable side. IPL 2021 Points Table: Latest Team Standings and Leaderboard After the Suspension of Indian Premier League Season 14.

Archer’s thunderbolts have rattled many potent batting line-ups, and his ability to play big shots down the order is like a cherry on the cake. Moreover, he was the Most Valuable Player (MVP) in IPL 2020. On the other hand, Stokes is arguably the best all-rounder going around in world cricket, and his record speaks volumes of his prowess. Hence, the addition of these two would enhance RR’s chances of getting the trophy after 2008.

Notably, another England player who left Rajasthan Royals midway is Liam Livingstone. Unlike Stokes and Archer, the right-handed batsman didn’t sustain any injury but pulled out citing bio-bubble fatigue. Although the dasher wasn’t part of RR’s first-choice playing XI, he’s a potent replacement if any overseas RR stars sustain injuries. Hence, having a player of Liam’s calibre in the squad is also a positive, and this is another reason why RR would be happy with IPL postponement.

(The above story first appeared on LatestLY on May 04, 2021 07:04 PM IST. For more news and updates on politics, world, sports, entertainment and lifestyle, log on to our website latestly.com).