"KL Rahul and Quinton de Kock's right hand and left hand combination makes a devastating opening pair and they can get the team off to a flying start," he added. 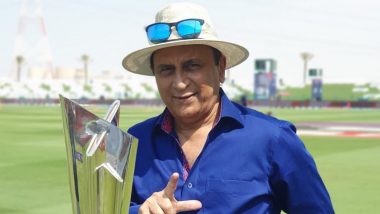 Mumbai, March 28: As debutants Gujarat Titans (GT) and Lucknow Super Giants (LSG) lock horns at the Wankhede Stadium on March 28, all eyes will be on LSG's opening pair KL Rahul and Quinton de Kock who joined the franchise from Punjab Kings and Mumbai Indians respectively.

Speaking about K L Rahul and Quinton de Kock's opening combination, legendary Sunil Gavaskar said, "The best part about Quinton de Kock is the fact that he also has captaincy experience. He has been a captain of South Africa and knows all formats of the game. He knows what team building is all about because we are talking about a different team now. He will be very keen to contribute towards the team building process.

"KL Rahul and Quinton de Kock's right hand and left hand combination makes a devastating opening pair and they can get the team off to a flying start," he added. GT vs LSG, IPL 2022 Live Cricket Streaming: Watch Free Telecast of Gujarat Titans vs Lucknow Super Giants on Star Sports and Disney+ Hotstar Online.

"When he was the captain of Punjab Kings, he seemed to be preoccupied, maybe he was not getting the 11 that he wanted. The new franchise Lucknow Super Giants is going to be a different challenge for KL and if he can bat the way he did in previous seasons and take the team to the knockouts if not actually the finals, then he would have taken a big step forward as far as his own cricketing career is concerned," Gavaskar said during a Gameplan episode on Star Sports.

(The above story first appeared on LatestLY on Mar 28, 2022 04:34 PM IST. For more news and updates on politics, world, sports, entertainment and lifestyle, log on to our website latestly.com).