IPL 2022: Mayank Agarwal, Bhuvneshwar Kumar Look Back at the Season After Tournament Ends for SRH, PBKS

As the season sets on the journey of Punjab Kings and Sunrisers Hyderabad in IPL 2022, skippers Mayank Agarwal and Bhuvneshwar Kumar reflected on how it all went for their respective teams. On Sunday, in the last league match of the tournament, Punjab registered a five-wicket win over Hyderabad to end their campaign on a high. 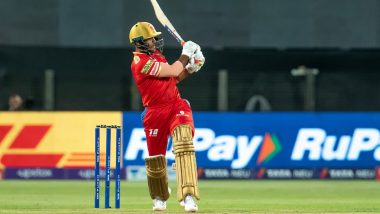 Mumbai, May 23: As the season sets on the journey of Punjab Kings and Sunrisers Hyderabad in IPL 2022, skippers Mayank Agarwal and Bhuvneshwar Kumar reflected on how it all went for their respective teams. On Sunday, in the last league match of the tournament, Punjab registered a five-wicket win over Hyderabad to end their campaign on a high. The win in their last league game after being out of running for the playoffs was something that Punjab were happy with after their inability to string consecutive wins in the tournament.

"We couldn't stitch two back-to-back wins. We lost wickets in a cluster, and that at times derailed us. We have played an aggressive brand of cricket overall. We are going to sit and discuss now after the IPL. We were here to get two points and we were here to enjoy ourselves. We meant business and looked to execute things to the best of our ability," said Agarwal after the match. Asked about the positives for them, Agarwal had many to count on. "The way Livingstone batted, Dhawan played well. Bairstow since the time he started to open. If we go out there and play the kind of cricket we play, we can do well in the next season." Liam Livinsgtone’s 49-Run Blitz Helps Punjab Kings End IPL 2022 Campaign With Five-Wicket Win Over Sunrisers Hyderabad.

Agarwal, who was omitted from India's squad for the Edgbaston Test against England to be held from July 1-5, had a painful welcome at the crease when he was hit on the ribcage by tearaway pacer Umran Malik. "It's going to be sore, going for an x-ray now. They never expected a no-ball, so he wasn't ready. I asked him whether he was wearing protective gear," said the right-handed batter. Stand-in Sunrisers Hyderabad skipper Bhuvneshwar Kumar was happy to captain the side in Kane Williamson's absence but stated that he would have been happier if the 2016 champions were on the winning side on Sunday.

"Good feeling (on captaining Hyderabad), but it would have been better if we had won the match. I think we were a lot of runs short (with Punjab winning with five overs left), but we had to field better, didn't take our chances and there were fumbles, but this was the last match of the season and that does have an effect." Asked about where Hyderabad went wrong despite a five-match winning streak, Bhuvneshwar pointed toward the second half of the tournament. "We won 5 on the bounce and had the momentum, but it didn't go our way and we pretty much lost all our matches in the second half of the tournament. We will have to look at our squad and the management will have to work on our weaknesses ahead of the next season." SRH vs PBKS Stat Highlights, IPL 2022: Liam Livingstone the Shining Light As Punjab Kings End With a Win.

Amidst the negatives, Bhuvneshwar had some positive points to speak for Hyderabad, team-wise as well as personally. "Have had many positives, Umran Malik and Abhishek Sharma were the obvious positives, but we have a decent core of batting with Aiden Markram and Nicholas Pooran coming up pretty well. As for me, it was a challenging season with injuries hampering me, though I did a decent job and will look to come back better in the next season."

(The above story first appeared on LatestLY on May 23, 2022 11:02 AM IST. For more news and updates on politics, world, sports, entertainment and lifestyle, log on to our website latestly.com).